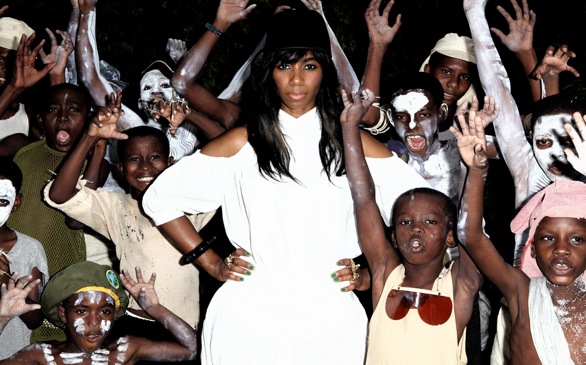 Every person that heads to a concert venue naturally goes there with specific expectations - they want awesome live musical gymnastics, a rad story to bring back to their friends or just a distraction from the dull work week. On Friday night at Club Nokia, Santigold delivered her own idea of what a live show should give fans. For the spunky artist, that meant costume changes, talented sidekick dancers, and even a fake horse. Santigold took the stage with an air of ease, and gave concertgoers a good time without seeming to break a sweat.

With the help of two fiery and impressively flexible dancers, Santigold got the crowd out of its seats easily. She performed songs from both her self-titled debut album and her newest release, Master of My Make-Believe. No matter the track, Santigold performed the song as if it were second nature.

There was a distinctly unique sound to all the tracks: a touch of African influence, a bit of hip-hop lyrical feistiness, a sampling of groovy rhythms and a lot of dance party energy, combined for something that was all parts Santigold. Club Nokia was transformed into a collective of unrestricted singing, swaying, hip-shaking and everything between.

Santigold clicked naturally with the audience, speaking out to the crowd in between tracks about things like the cultural thriving of Los Angeles. During “Creator,” a naturally dance-able track, she invited certain audience members to hop on the stage next to her. As she sang, she urged them to dance along, at one point hugging a little kid that was dancing his heart out near her. Her more popular songs, like “L.E.S. Artistes,” got the audience going, and with the help of quirky choreography, tracks like “Look at these Hoes” let her show off both her unique voice and her dance moves.

The energy even stayed high during her costume changes, as the dancers had their own interludes where the girls got the audience yelling. It’s those sort of elements that make a show interesting, and it was obvious that Santigold thought about her audience when putting together her show.

Each song was delivered crisply, with no lack in enthusiasm or talent. Santigold wasn’t afraid to throw in her own dance moves and appropriate yowls during the high points of the songs. “Disparate Youth” was especially delivered with heart, each lyric sung from the artist in a way that made it obvious she weighed each word.

Santigold smartly chose the groovy, relentlessly fast track “Big Mouth” to close out the set. The dancers matched her energy, and she delivered each note with a building intensity. The track tied the bow on an energetic performance, which ended with her saying goodbye to the city  --for now. As the man who repeated the same chant of "Santi, Santi" throughout the night showed, her L.A. fans will happily be waiting for her return.