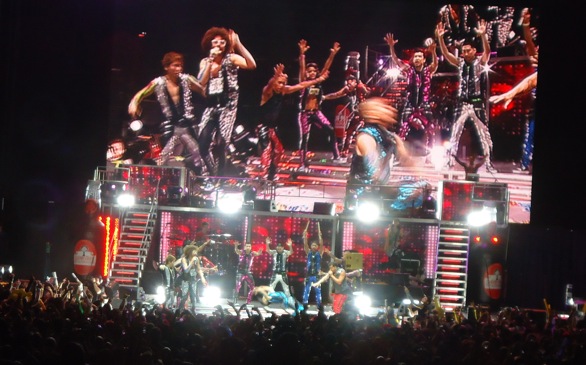 Last night, LMFAO’s Sorry for Party Rocking tour made its way to the Staples Center, a homecoming show of sorts for the SoCal natives.

As the concert began, dubstep beats pulsated through the arena, as dancers decked out in laser lights took the stage. Redfoo and a newly afro-less Sky Blu soon emerged, wearing their signature style of loud animal prints, shocking neons, lens-less glasses and over-the-top bling, belting out their latest single, “Sorry for Party Rocking.” The boys brought their unique energy from the get-go, and the crowd kept this intensity going as they fist pumped along to “Get Crazy” – best recognized as the theme of MTV’s “Jersey Shore” – while inflatable zebras bounced around through the crowd.

The duo maintained a repartee with the audience throughout, and seemed especially connected to this particular crowd, being that they were on their own turf. This was especially true leading up to their performance of “I’m in L.A. Bitch,” as Redfoo reminisced about nights out in Hollywood. During this performance, the stage was converted into an all-out party, complete with beer bongs and spraying champagne.

LMFAO did a good job of mixing up songs from their debut album, Party Rock, and their now certified-gold sophomore release, Sorry for Party Rocking, so fans, both old and new, had plenty to sing and dance along to throughout.

Helping keep the crowd pumped up from start to finish were the truly spectacular dancers – who at different points in the show were dressed as L.A. Lakers, army men and a fuzzy pink bear. After a brief break in LMFAO’s performance during which the dancers put on an incredible show of their own, the two re-emerged to sing crowd favorite, “Shots,” during which an explosion of confetti covered the audience. At the end of the song, it seemed as if Redfoo and Sky Blu had taken too many of the shots being passed around on stage, as they exited by being carried out on gurneys.

But of course, they had to come back out for an encore, performing their smash hit “Party Rock Anthem” as well as “Champagne Showers.” Redfoo wasn’t joking in interviews when he said audience members should bring umbrellas for this particular performance, as he, Sky Blu and the dancers made sure to drench the front rows with exploding champagne bottles.

This would have been a fitting end to the evening, but the two emerged for a second encore to perform the much-anticipated “Sexy and I Know It” –and this performance was well worth the wait. Moments into the song, everyone on stage was wearing nothing but Speedos and “wiggling” along to the chorus. All of a sudden it seemed that the Staples Center had been converted into a male strip club –a quirky, colorful and joyful one at that. The show closed with a reprise of “Party Rock Anthem,” sung, according to Redfoo, in honor of Kobe Bryant.

As Redfoo stated in interviews, the purpose of the tour was to bring LMFAO’s outlandish music videos to life, and the show certainly did just that. The group’s ability to maintain such energy and vigor throughout was sincerely impressive, and everyone in attendance definitely was able to get their party rock on.