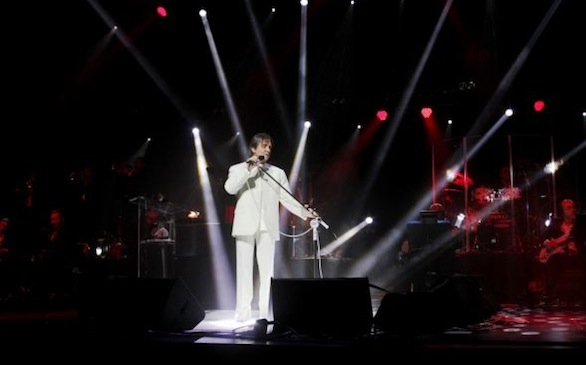 Carlos's voice is not quite the same as it was in the 1970s, 80s or even the 90s, but that doesn't mean he cannot provide an exciting and unforgettable show. On the contrary, Carlos can still deliver a magical night filled with his classics, charima, jokes and romanticism.

A 15-man orchestra accompanied this legendary musician, who composes his own music, plays the guitar and piano, and performs in Spanish, Portuguese, English, and Hebrew, among other languages. As he appeared on stage dressed entirely in white, the band -- which featured an organ, white piano, trumpets, saxophones, bass, guitar, drums, and percussion -- introduced him with a wonderful mix of Carlos's most popular tracks.

Throughout the night, Carlos portrayed dramatic, romantic, upbeat and acoustic melodies. A quite touching and melancholic moment came during his performance of "Lady Laura," which he wrote and dedicated to his mother. This tune details his grand desire to be a kid once again, especially so that his mom can hug him tightly with the love and tenderness she always gave him.

Romantic portions in his set proceeded with the incomparable hits "Detalles" (Details), "Qué Será De Ti" (What Is Of You) and "Si El Amor Se Va" (If Love Goes Away). These three songs completely stole the hearts and souls of the sold-out crowd, which included attendees from all over the world, including many Brazilians and Central Americans.

One of the most awaited tracks of the night was "Un Gato En La Oscuridad" (A Cat In The Dark). When Carlos, who still manages to be a provocative flirt, sang this, the public went wild with emotion, given that it is arguably his most famous song.

Carlos kept a banter going with the crowd all night. At one point, he confessed the three things he absolutely loves in life: 1) sex, 2) sex with love and 3) ice cream. Interestingly enough, of course, the audience became rather mesmerized, but was very pleased with his unexpected remarks - this could easily be called the highlight of the night, but that would be an insult to his music.

Carlos closed out the impeccable musical show with "Amigo" (Friend) and "Jesus Cristo" (Jesus Christ). Both tracks are upbeat and pay devotions to his best friend and Jesus, respectively.

Before this tour landed in Los Angeles, Carlos last performed in 2010 in L.A. Let us hope it does not take another two years for this brilliant singer-songwriter to come to our city once again.