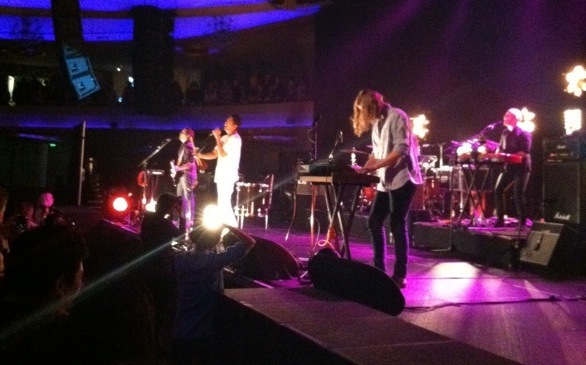 Los Angeles got a taste of the music scene from down under when Australian rockers the Temper Trap came to the Hollywood Palladium last Friday night.

Lead singer Dougy Mandagi appeared as a heavenly apparition clad in all white, opening the show with the up-tempo – yet lyrically dark – “London’s Burning,” an impassioned tune written about last year’s riots throughout England.

Mandagi showed his incredible musical chops throughout –in addition to being the lead vocalist, he played numerous instruments, playing the tambourine during the opening number, switching to drums for the next song, “Need Your Love,” and even playing guitar later on in the show.

The five-piece seamlessly transitioned between songs from their latest release, The Temper Trap and their 2009 release, Conditions. It was clear that the audience favored the older tracks, cheering loudly for “Love Lost” and double-clapping along with the beat.

While the Aussie indie band should be lauded for their variety of sounds and tones they display throughout their albums, some of the slower-paced songs just did not work well in front of a live audience. “Rabbit Hole” off their latest release noticeably brought down the energy of the crowd with its melancholic rhythms and lyrics.

However, the band quickly turned things around with a lively performance of “Fader,” which had fans ooh ooh-ing along with the chorus.

After playing “This Isn’t Happiness” – which keyboardist/guitarist Joseph Greer said is his favorite song to perform live – Mandagi introduced the band’s newest single, “Trembling Hands,” which had the entire venue shaking with its powerful bass.

The Temper Trap closed their set with the lyric-less “Drum Song,” and the Palladium was converted into a trippy dance party. When the group departed the stage, there was no question in anyone’s mind that they would be back on-stage shortly to perform an encore, as they had yet to play fan-favorite, “Sweet Disposition.”

However, they made everyone wait to hear their most famous track, performing the slow-paced “Soldier On” and the only slightly more energetic “I’m Gonna Wait” before playing the familiar guitar riff of “Sweet Disposition,” which made the crowd go wild. It seemed everyone had been saving their energy for this performance, as the whole venue came alive, with everyone’s hands in the air, belting out the familiar lyrics along with the tune.

The 16-track set ended on a euphoric note, leaving the crowd – which seemed to include many from the band’s native Australia – in high spirits as they left the Hollywood venue.