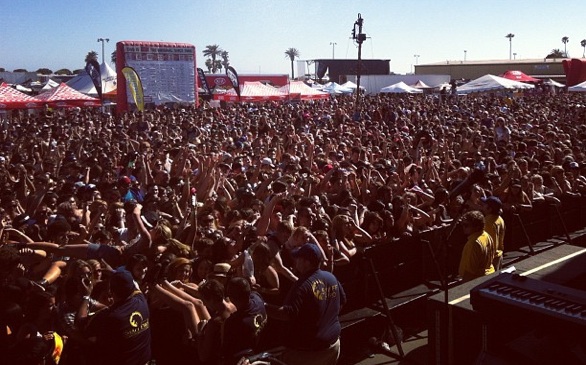 The crowd at the Ventura stop on the Warped Tour seemed smaller than usual.
(Credit: facebook.com/Instagram/Vans Warped Tour)

Sunday in Ventura, California marked the sixth stop of the 18th annual Vans Warped Tour. A summer-long journey around the entire country, Warped Tour has been a staple for pop punk, punk, hardcore and alternative rock fans for years. After not attending for almost four years, I was flooded with nostalgia as I entered the gates. Unfortunately, however, the scene was very different than I remembered. Headliner New Found Glory’s set featured a logo in the background, “Pop Punk’s Not Dead,” that found itself reappearing all over parts of the entire festival. Despite what these banners read, while the bands were full of energy and a decent number of fans were still coming out to support them, there was still a feeling that pop punk is in the process of dying.

Simply put, the Warped Tour series isn’t what it used to be. Its stages are far less expansive, the size of the venue has shrunk, the fans don’t flock each stop as much as they used to, and worst of it all is the inexplicable lack of enthusiasm among attendees. I remember the days when bands such as Rise Against and Against Me! would play shows with veterans such as Pennywise and NOFX. These shows drew massive crowds, with liveliness that could match those of any other festival. Circle pits would be visible from hundreds of feet away, with crowds going as far back as the eye could see. This year the main stage was drastically smaller than shows past, with fans going back at most 100 feet. The saddest sight was to only see maybe the first ten rows crowd surfing, pushing, moshing, dancing or doing anything that a Warped Tour crowd should be expected to do.

Fortunately, the quality of the bands and music hasn’t suffered as much as one would think. Many old school fans will complain that there is too much focus on more of the pop acts, like Yellowcard and New Found Glory, but while I do not particularly enjoy this type of music, both acts performed very well and with high energy. They entertained and pumped up the crowd, especially the younger members in the audience.

Other acts such as Every Time I Die and Senses Fail appealed to different fans, but also performed admirably. These two bands are mainstays on Warped Tour year after year, and have to be commended for their love of what they do. Senses Fail had an especially tight set that covered all their hits. The absolute savior of the day was Taking Back Sunday. Their show got the crowd going from the start, and easily elicited the largest and rowdiest audience. Front man Adam Lazzara continually kept the set going at a rapid pace with only short breaks to rally the fans. For a forty-minute set, Taking Back Sunday managed to squeeze in most of their hits, including their most successful single and crowd favorite, “MakeDamnSure.”

Overall, this Warped Tour was a slight disappointment due to the disorganized and cheap looking set-up. However, seeing Taking Back Sunday alone was worth it all, and helped me remember that rock isn’t dead quite yet.