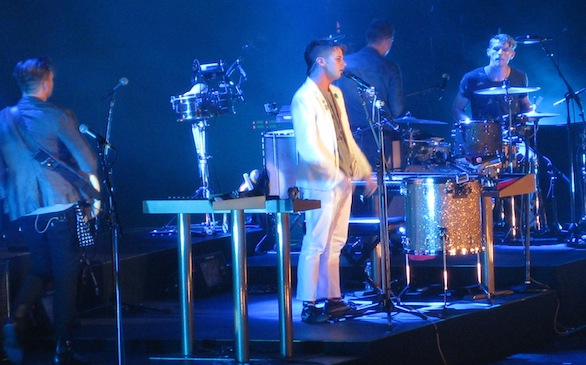 Foster the People performing at the Gibson Amphitheatre June 30, 2012.
(Credit: Facebook/Foster The People)

After going viral, Foster the People have proven why they experienced such a surge in popularity --pure talent and great music. This electrifying indie-pop trio continues to prove why the public has become enamored with them while on their current tour, which made a stop at the Gibson Amphitheatre at CityWalk for not one, but two nights of performaces, a true testament to their rising fanbase.

Foster the People, who performed after Kimbra's unique opening act and was followed by Mayer Hawthorne's funk charm, delivered one of the most impeccable sets I have ever witnessed live, and I must admit that I have seen my share of music throughout the years in Los Angeles.

Often compared to MGMT - a likening I personally don't agree with - Foster the People are revolutionizing music with their mix of alternative rock, indie-tronica, indie dance and neo-psychedelia.

Led by sensational vocalist and songwriter Mark Foster and accompanied by Cubbie Fink and Mark Pontius, Foster The People played to a sold out crowd both nights of their Universal City shows, and the band did not disappoint the packed stands one bit. "Houdini" was a well-performed tune, and so was "Call It What You Want." Off of their E.P. Foster the People, "Helena Beat" also provided to be a damn good time.They of course finished their 90-minute set with beyond infectious and still hot track "Pumped Up Kicks."

Torches, the debut studio album, is now available, and with it, the L.A.-formed band continues to prove that they are one of the best musical talents out there.