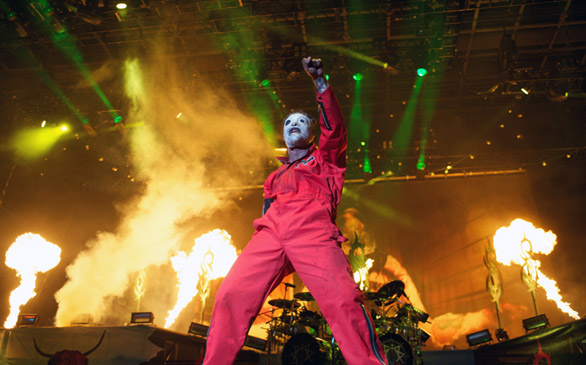 Slipknot was amongst the performers during the festival.
(Credit: Scott Uchida)

Mayhem Festival has been going on for five strong years, reaching crowds of 40,000 on average. Taking the place of Ozzfest and Taste of Chaos, the music event fills a huge void for aggressive music festivals. Metal does well on its own, but there isn’t a real festival in the U.S. for this kind of music. All across the world there are huge three-day shows that bring together the best of the best in this genre, but when it comes to America, we have become anemic to the power of what lies in the metal world… and that void is filled with Mayhem.

Since there really isn’t a good place for something like the Mayhem Festival in L.A., the organizers were relegated to have the event at San Manuel Amphitheater in the city of Devore. Its far and dirty, but it kind of makes the event even better. From the massive sound system on the main stage to the impromptu bonfires in the field up above, it truly gives you the sense of rebellion and the ultimate release of aggression.

And that feeling is mutual among the attendees as well as the acts performing in the show. Chris Fehn of Slipknot talks about how the show pulls from something deep inside him: “A month before the show, I have no energy. A week before, no energy. The day of, nothing. I think there’s no way I’ll be able to do it, from touring and traveling. But when I get on that stage, another part of my brain clicks on and I can’t not go as hard as possible.”

With that kind of energy coming from just one member of a band like Slipknot, you can only imagine what it feels like to be in the crowd of thousands giving that energy right back. And that’s really the best thing about the Mayhem Festival, and the reason why it's been doing so well for so long. The ability to have bands like Slayer share stages with As I Lay Dying and Motorhead offers the music world a small glimpse into possibly the most dedicated fan base on the planet.

“It’s special,” says front man for As I Lay Dying, Tim Lambesis. “There’s these festivals with hundreds of bands, but Mayhem offers a smaller collection and lots of styles, so you can really see them all and get a taste of everything.”

The fans feel this is a special event, and the fact that it tours all over the country makes it even more impressive. With Mayhem… the show comes to you. And that’s exactly what this is –a show of the highest caliber proving that once again, metal is not to be counted out any time soon.