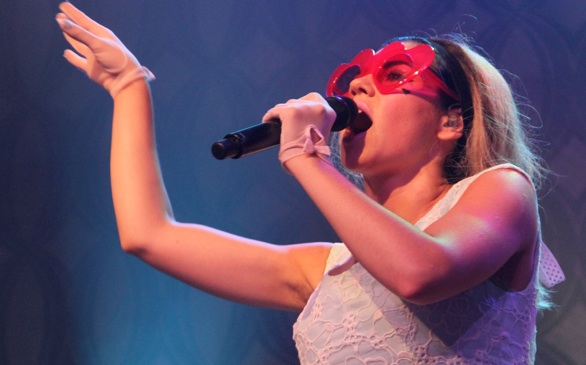 Marina and the Diamonds electrified the sold-out crowd at the Fonda Theatre.
(Credit: Amanda D'Egidio)

Upon entering the Fonda Theatre, the remnants of the final song by opening band MS MR blared through the speakers. Yet, a majority of the crowd was there for one purpose and one purpose only: to see the headlining artist of the night, Marina and the Diamonds. Many of the fans or, in Marina's words, the “diamonds,” donned tiny hearts under the corners of their left eyes as a tribute to her newest album, Electra Heart.

Marina Diamandis, Welsh singer and songwriter for pop-indie band Marina and the Diamonds, made a grand entry in stunning white bridal couture, veil and all, with the opening song “Homewrecker” from her most recent release.

The stage was designed as a casual apartment, including wall paper, a coat rack and even a couch for lounging on mid-show, as well as a neon sign that read "Electra Heart." Marina used these props to her advantage and had frequent costume changes, including a light pink '50s-inspired day dress and an emerald green prom gown.

The band gave a truly impeccable performance at this sold out show. With precise attention to sound and a harmonious blend of instrumentals and vocals, the live performance sounded as clear as a studio recording. The set list revolved mostly around the new album; however, the band made sure to include some older songs, such as “Oh No!” – which the crowd went wild for – and “Obsessions,” which was accompanied by Marina's own piano playing.

The band consistently kept the crowd on their toes, giving the show and music the hype and excitement it deserved. With an outstanding encore and closing with the all-time favorite, “Hollywood,” Marina and the Diamonds had a successful night, and prove why they will continue to prosper as the next up-and-coming pop-indie group.