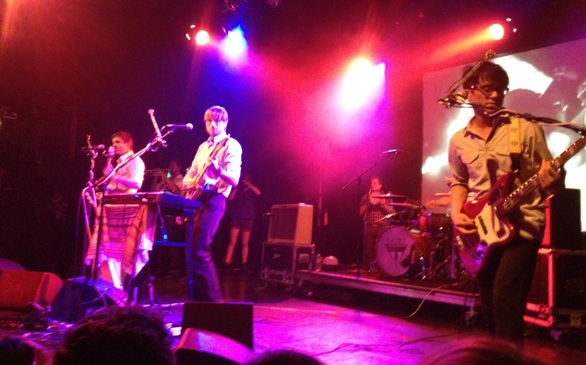 The performance was complete with
(Credit: Brenda Camberos)

Last Saturday, the Los Angeles-based rock band Saint Motel kicked off their West Coast tour in support of their Voyeur album release with a sold-out concert at the El Rey Theatre. The 700 plus capacity venue was packed with fans of all ages, eager to hear the band’s new tracks.

This concert had all the makings of great show: lights, visuals, vigor and of course, awesome music. From the moment the band took the stage it was clear that this show was going to be memorable. Lead singer and keyboardist A/J Jackson commanded the crowd with charisma and genuine earnestness. With every note he poured his heart out, and people reciprocated by mouthing the words to nearly every song.

When I think of Saint Motel, I think of an amalgamation of geek-chic, art student, punk rock and ‘60s pop. Lead guitarist Aaron Sharp supplied the backup vocals that harmonized each tune and gave it the robust catchy pop everyone loves them for. Dak was on-key, making sure the thick baselines were on cue, and Greg tore through the skins like nobody’s business. There’s no doubt this night was THEIR night.

Saint Motel opened with “Honest Feedback,” which launched the crowd into frenzy from the first note. “Feed Me” came next, with a tropical feel accompanied by trumpet and sax that turned the place into a party on a rock ‘n’ roll cruise ship sailing through the Virgin Islands.

Their performance of “Benny Goodman” brought an unexpected treat, when a young child, no more than 7 years of age, jumped on stage and charmed the pants out of the crowd with his outstanding footwork. The little dancer did the robot and a few other skillful moves before moon-walking off the stage.

And just when you thought it couldn’t get better, Saint Motel dropped another surprise by performing a cover of Brenton Wood’s classic, “Gimme Little Sign.” This song, executed perfectly, left the crowd hot and ready for tracks from their previous release, ForPlay.

With Voyeur, the band departed from their previous guitar pop rock and ventured into a more tropical, lounge-y feel. Whether they played songs from ForPlay or Voyeur didn’t matter; it was obvious that this band had a solid base of loyal fans and they loved it all.

The climax of the performance came when the band performed “Dear Dictator” from their previous work. The song sounded as crisp and clear as if you were listening to their CD; the entire place thundered, and the crowd danced as if their lives depended on it. Throughout the concert, which was about an hour and a half, guys and girls alike began surfing the crowd.

“Butch,” from their last album, was another hit that kept the vibe on high gear. Girls in mini skirls floated through the crowd while A/J pounded on his piano, and all other bodies convulsed uncontrollably at its sound. This local band is growing, and selling out a place like the El Rey is a good indication that they are on their way up.

The show was almost perfect up until the band experienced some minor technical difficulties. The band quickly recovered while cracking a few jokes, and after a few moments the glitch was forgotten.

As A/J, Dak, Greg and Aaron performed their last song, a couple of fans joined them onstage. Suddenly, after those few, the entire crowd began to rush the stage, and the music bash went into overload. It was like the scene from a Flaming Lips concert: lots of visuals, high-energy and lots of people rejoicing on stage –only a little crazier!

The music was accompanied by an installation of videos and visuals that really grasped the songs, and took the experience to a new level.

Before the closing, A/J thanked the crowd for attending, and said that this show was unique, that it had some sort of “an out of body experience.” What the audience witnessed that night was POP AT ITS BEST.