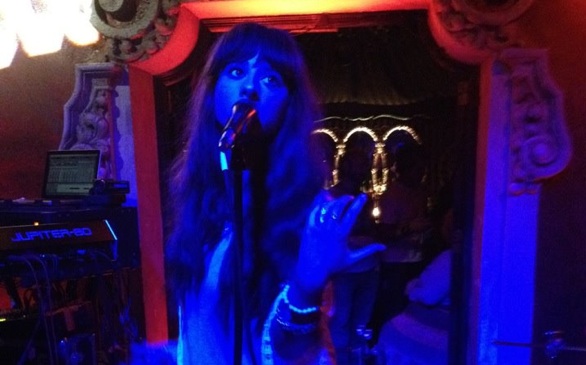 Bardot Hollywood was as packed as I've ever seen it this past Monday night for one of Foxes' first ever U.S. shows.

Twenty-two-year-old songstress Louisa Rose Allen, a.k.a. Foxes, was joined by two band mates –– a keyboardist and a percussionist –– for her set at Bardot's weekly event, School Night, which they host every Monday night. Foxes was out performing to support the release of her first-ever E.P., Warrior.

Foxes' sound is a paradoxical blend of sweetness and fierce strength, but somehow this native of London is able to fuse both opposing qualities to make for a  unique sound all her own. Her music, which is classified under the genre of electro-pop, performed live has a beautiful, ethereal, almost dreamlike quality to it. Much like the structure of her songs on her E.P., Foxes' set at Bardot began with softer, more sluggish melodies and crescendoed with more upbeat tracks such as "Warrior," which lends the album its title.

My favorite of the night "White Coats," already an internet favorite that has garnered the attention of numerous remixers. "White Coats" has the most poppy feel of the songs off Warrior. A combination of its electronic synth undertones and its bouncy percussions make it a track that you can't possible sit still to. It's one of those tracks that make you want to get up off your seat and dance no matter where you are, and belt out the song's chorus. Speaking of the chorus, Foxes sings out the words "I keep the memories inside my mind / To show me how to leave the darkness / You will take me home and then believe me" so fervently that you can't help but become immersed in her music.

Foxes makes herself wholly emotionally vulnerable when performing her music, which translates easily to the audience, making for a performance that doesn't feel like a performance at all but merely candid self-expression.

One quick search of Foxes on YouTube, and you can already see she's gaining a lot of internet buzz. I was lucky to catch Foxes while she's still relatively low-key in the States, performing at a venue as small and intimate as Bardot. At times I felt the intimate size of the venue constricted Foxes' skillfully seasoned vocals, so that it was often masked by the reverberations of the near-deafening percussions. In any case, I forecast that Foxes will soon be selling out and performing much larger venues in not too long.

Foxes' E.P. Warrior is available now, and "White Coats" can be downloaded for free on her Facebook page.