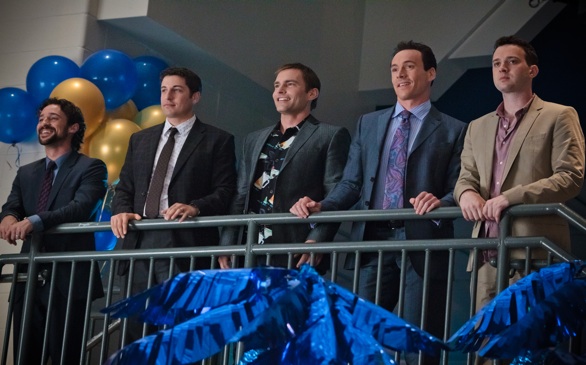 The original gang is back in American Reunion, now on DVD and Blu-ray.
(Credit: Hopper Stone/Universal Pictures)

The Majors: Based on the much-loved memoir Another Bullshit Night in Suck City, Being Flynn stars Robert De Niro, Paul Dano and Julianne Moore in the funny and poignant story of an aspiring writer who volunteers at a homeless shelter, only to rediscover his estranged father. Paul Weitz (About a Boy) directs.

Christian Bale takes on a quieter role than usual in the powerful international war drama, The Flowers of War. Yimou Zhang (Hero) directs this story of the second Sino-Japanese War. Enemy forces overrun the capital city of Nanjing, forcing an American posing as a priest to band together with a group of schoolgirls and some courtesans to fight for survival.

The Idiotbox: “Adventure Time:” Season 1, an oddball send-up of epic fantasy quests, follows a boy and his magical dog in their travels through a post-apocalyptic world. This is a totally original animated series with an almost surreal sense of humor.

A new agent (Aaron Ashmore, “Smallville”) joins the Warehouse as they face a powerful new enemy in “Warehouse 13:” Season 3. This Syfy series follows a top-secret team that recovers supernatural objects and protects them from the forces of evil.

Part of the superheroes-in-the-real-world genre, “Alphas:” Season 1 follows a group of ordinary people, who just happen to have evolved physical and mental abilities, as they are enlisted by the Department of Defense to solve the crimes too far out for the FBI and CIA. The eminently watchable David Strathairn stars as the psychiatrist who leads them.

Funny Business: Will Ferrell stars as a rancher caught up in a war with a Mexican drug lord (Gael García Bernal) in the Western telenovela parody, Casa de Mi Padre. It’s a bold comedic experiment with possibly the funniest guy in the world doing his thing —in Spanish. Diego Luna co-stars.

Jennifer Westfeldt (Kissing Jessica Stein) assembles a stellar ensemble cast for her directorial debut, Friends With Kids. She stars alongside Adam Scott as two platonic friends who decide to have a kid together to avoid spoiling their romantic relationships. Jon Hamm, Kristen Wiig and Maya Rudolph co-star.

The whole American Pie gang is back for the series’ raunchy fourth installment, American Reunion. When the class of '99 reunites in their small Michigan town, young father Jim struggles to resist the girl he used to babysit, now grown up and looking to lose her virginity.

The Horror! The Horror!: Intruders stars Clive Owen as the father of a teenage girl terrorized by a faceless monster. Somehow, they are linked to a boy in Madrid who is also haunted by the apparition. Juan Carlos Fresnadillo (28 Weeks Later) directs this tense thriller.

Stranger Than Fiction: Turn on a cable news channel these days and chances are you’re more likely to see two talking heads yelling at each other than receive any serious discussion of critical issues. Patriocracy is a vital and timely documentary examining how toxic political discourse from both parties cripples Washington and American progress.

Blu Notes: A contender for greatest musical ever made, Singin’ in the Rain is a wholly enjoyable lark, chock-full of classic songs and surprisingly fresh humor that will win over even the most cynically musical-averse.

One of the all-time great sports films, Chariots of Fire is the true story of two very different British sprinters as they compete in the 1924 Olympics. A powerhouse cast (including Ian Holm and John Gielgud) brings off this inspiring Best Picture-winner. A CD sampler includes Vangelis’s classic theme.

Jane Fonda became a cult icon with her sex kitten role in the psychedelic sci-fi campfest, Barbarella. Fonda is a futuristic heroine who gets herself into all kinds of titillating situations (including a zero-gravity striptease) in order to save the universe from otherworldly evils.