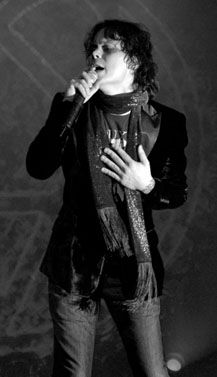 If you ever wanted to know what a Hot Topic fashion show would look like, the Friday night HIM show at the Wiltern would have been a good place to start.

The Finnish "love metal" band had a pretty wide range of fans, from hipsters (including one guy in a pink Iron Maiden shirt that needed to be put out of his misery) to poser goths to real goths to metal-heads. There were people of all ages, body types and ethnicities. The only constant was that pretty much all of them wore black. Even former Fear Factory guitarist Dino Cazares was there; he appeared to be hitting on a goth chick.

This diverse array of people was there because of one thing: their love of HIM. Unfortunately, this show was marred by a series of problems that prevented fans from getting the true HIM experience.

The first problem was the opening support act, Skindred. An energetic stage show didn’t really make up for the band’s total lack of good songs.

Direct support band Finch had the same lack of good songs, but that wasn’t the biggest problem with its set; no, the biggest problem was that the band only played for 15 minutes, then threw a hissy fit and walked off stage. It wasn’t entirely the band’s fault though; its scream-core doesn’t exactly fit in with the mellow hard rock of the headlining band, and the crowd gave the band a freezing-cold reception. However, that’s no reason to disappoint the fans in attendance. I’m pretty sure Finch didn’t make any new fans that evening, nor should any band that acts that unprofessionally.

HIM, on the other hand, received a very warm reception. HIM is basically the goth Bon Jovi: it makes non-threatening, catchy hard rock that women can enjoy and men don’t find too wussy. Also, lead singer Ville Valo (who is, basically, HIM) has the whole "sex god" thing going for him. He certainly capitalized on it, strutting around the stage and playing it up for the ladies.

Unfortunately, considering that he’s the main reason to see HIM, it’s a pretty big problem when his microphone doesn’t work. The vocals were subdued and crackling for the first six songs, causing Valo to throw the microphone off the stage in frustration. A working microphone was eventually found, but a lot of the momentum was lost.

However, the concertgoers certainly got their money’s worth in terms of stage show and songs. The stage set-up was pretty elaborate for a theater show, with color-changing neon lights set up around the stage (to fit in with the band’s new album, Dark Light, I suppose), fog machines, spotlights; pretty much everything except pyrotechnics. HIM played for a full 90 minutes, hitting most of its popular songs like "Your Sweet 666" and "Wings of a Butterfly." The problem is, its songs aren’t different enough to hold the interest of anyone but the most dedicated fans for that long a set, and even the really diehard fans seem to be tired by the time the band finished – with a dirge, no less.

HIM knows how to put on a good show; however, the problems kept it from being truly great. Of course, any disappointed fans could see Valo perform the following night, since the band was doing a two-night stand. But for the fans that were there that evening, this was just one more reason to be depressed.