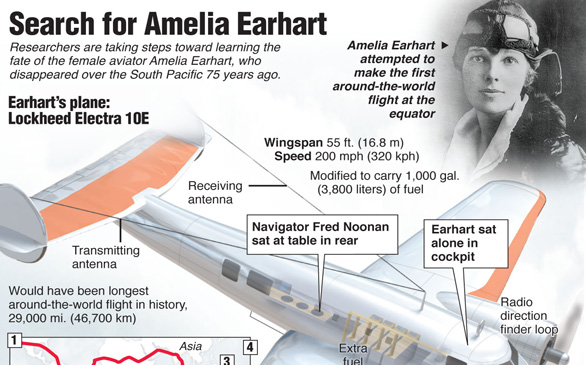 The latest expedition failed to find the wreckage of the plane Amelia Earhart was flying.
(Credit: MCT 2012)

The fate of famed aviator Amelia Earhart remains a mystery. The latest expedition failed to find the wreckage of the plane she was flying when she went missing 75 years ago.

Earhart, born 115 years ago Tuesday, and her navigator, Fred Noonan, were lost on their July 2, 1937, flight from New Guinea to Howland Island in the central Pacific Ocean. Earhart was trying to become the first woman to fly around the planet.

A $2.2 million expedition, led by The International Group for Historic Aircraft Recovery, is now working its way back to Hawaii after failing to get the conclusive evidence that it sought about Earhart's disappearance.

"As is usually the case with fieldwork, we're coming home with more questions than answers," the group said in a statement posted on its website. "We are, of course, disappointed that we did not make a dramatic and conclusive discovery, but we are undaunted in our commitment to keep searching out and assembling the pieces of the Earhart puzzle."

The group had planned to spend 10 days searching the area for signs of Earhart, but "due to equipment problems directly attributable to the severity of the underwater environment at Nikumaroro, we only had five days on site," the group stated.

"In that time we saw no objects that we recognized as aircraft debris, but we have volumes of sonar data and many hours of high-definition video to review before we'll know the results of this expedition definitively," it said.

"This is just sort of the way things are in this world," the group's president, Pat Thrasher, told The Associated Press. "It's not like an Indiana Jones flick where you go through a door and there it is. It's not like that - it's never like that."

The group is also planning a voyage for next year to search the area where, some believe, Earhart survived a short while after the crash, Thrasher said.

Thrasher's husband, Ric Gillespie, is the group's founder and the leader of the most recent expedition. Thrasher had been in contact with him, posting updates on the group's website chronicling the team's difficulties with the tough underwater terrain and repeated problems with equipment.

The U.S. State Department had encouraged the privately funded voyage, which launched earlier this month from Honolulu.

Previous visits to the island had recovered artifacts that could have belonged to Earhart and Noonan. Further, experts say, an October 1937 photo of the shoreline of the island could include a blurry image of parts of the landing gear used by a Lockheed Electra, the type of plane used by the pair.

While Earhart remains missing, she is easily found on the Web, enshrined as a Google doodle Tuesday on the search engine's home page. The doodle depicts Earhart in a dashing aviator scarf at the side of a single-engine plane.