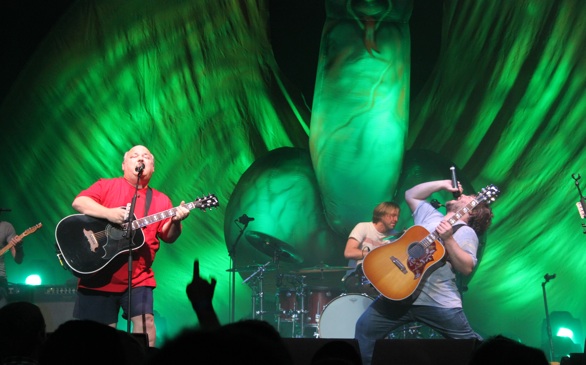 Comedians Jack Black and Kyle Gass of Tenacious D proved to fans last night that they could rock just as hard as they did when they first became a band back in 1994. Finishing their tour in support of their latest album released in May, Rize of the Fenix, the hilarious duo and their equally talented back-up band played in their home base of L.A. at the Wiltern.

The show was as hilarious as it was vulgar, which is to be expected of Tenacious D. Even with Black’s mother, wife and two kids in attendance, the duo performed songs like “F*ck Her Gently.” There was also a massive cock–shaped cock (chicken) with large wings proudly displayed on the stage behind the band.

The concert was more like a comedy show as Black and Gass mixed in humorous acts into their medley of mock rock originals and covers. They also played out certain parts from their original movie The Pick of Destiny, which released in 2006. Black showed his strengths as a comedian and kept audience members laughing throughout the show. Gass played his normal role as the more quiet of the two, but got just as many laughs as Black with his reserved personality. With props like nerf guns and special guests like a giant green alien and Sasquatch running around the stage, the show kept audience members entertained all night.

Fans sang along to classics like “Kickapoo,” “Tribute” and “Kielbasa,” and even knew the words to songs from Tenacious D’s newest album like “Rize of the Fenix” and “Throwdown.”

Tenacious D has formed a large fan base ever since they started as a band so many years ago. From the packed venue at the Wiltern, it’s clear to see that their fans aren’t going anywhere and remain loyal. Black joked near the beginning of the show that they would be singing new songs from an upcoming album set to release in 2015, and unless some fans don’t understand his sense of humor, it was pretty clear from the show that this will most likely be Tenacious D’s last album and tour. It was already a surprise to some when they released Rize of the Fenix this year, especially since their last album was released in 2006, when Pick of Destiny hit theatres.

Tenacious D played a great final concert on their tour, and Black and Gass actually came back out to play a few extra encores for the audience. The giant cock-shaped cock also shot out white, squiggly confetti at the end of the show, leaving audience members with a great lasting impression of the dynamic duo.