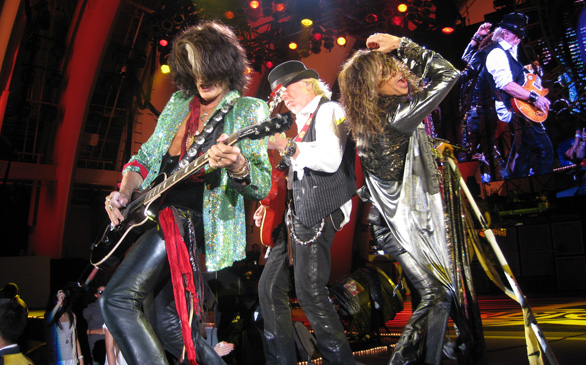 In a sold out concert at the Hollywood Bowl Monday night, rock group Aerosmith showed why they are arguably the greatest American rock band of all time.

Aerosmith hit the stage minutes after 9 p.m. after a thrilling opening performance from Cheap Trick (known as the American Beatles) that featured a classic performance of "I Want You To Want Me." Both bands provided the Los Angeles-based crowd a dose of popular tracks from their respective musical catalogues.

Led by the incomparable lead vocalist, singer, songwriter and multi-instrumentalist Steven Tyler, Aerosmith's set consisted of songs from throughout the ensemble's musical career. The act began with a creative introduction to the band, which acclaimed comic book writer Stan Lee introduced in excellent fashion.

Lee's appearance caused an enormous amount of excitement from the crowd, who reacted with surprise at seeing the Spider-Man, Hulk, X-Men, Thor, Fantastic Four and Iron Man co-creator. For the short seconds on stage, Lee truly rocked the house with his energy and joyful demeanor.

That was followed by popular songs such as "Same Old Song," "Oh Yeah," "Stop Messin'" and "What it Takes." As soon as the colossally famous "Come Together" and "Sweet Emotion" came to play, the standing audience roared to sing along with the acrobatic Tyler.

Throughout the performance, Tyler's uniquely energetic singing left many speechless. Dressed in highly-fashionable black leather jeans and accompanied by his trademark scarves hanging from his microphone stand, Tyler put on an intense show.

Tyler reigned supreme in "Sweet Emotion" and "Walk This Way" before closing out with what appeared to be the end of the night. But Aerosmith returned to the scene for an additional two songs: "Dream On" and "Train."

"Dream On," their debut single off their first album Aerosmith, granted a moment of nostalgia and brilliant memories. The near five-minute performance came with Tyler playing a wonderful piano set, while vividly singing "dream on, dream on, dream on..." in this blues-influenced power ballad.

With "Train," the fans could not have been more pleased, witnessing the presence of Hollywood's own Johnny Depp and his guitar. Aerosmith really went all out for its L.A. audience.