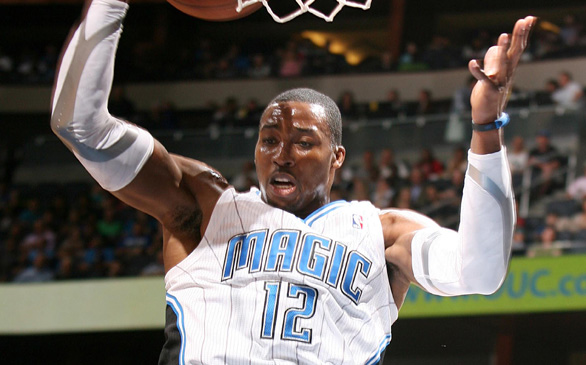 The Los Angeles Lakers have officially acquired three-time Defensive Player of the Year center Dwight Howard from the Orlando Magic; he'll now be wearing purple and gold. The Lakers receive Howard in a four-team trade that has the Denver Nuggets acquiring Andre Iguodala, the Philadelphia 76ers receiving Andrew Bynum and Jason Richardson, and the Magic getting Arron Afflalo, Al Harrington, Nikola Vucevic and one protected future first-round pick from each of the three teams. On top of that, the Lakers are also acquiring Earl Clark and Chris Duhon and send Josh McRoberts and Christian Eyenga to Orlando.

“We’d like to thank Andrew for all he’s done for the team and the organization,” Lakers General Manager Mitch Kupchak said in a prepared statement. “Andrew has been with us since we drafted him at seventeen years old and over the last seven years we have watched him develop into an All-Star player who has helped the team win two NBA Championships. He’s a special talent with a bright future. We appreciate all of his contributions and wish him well for the remainder of his career.”

“We also appreciate the contributions that Josh and Christian made,” Kupchak added.  “Although they were only with us for a short period of time, they worked hard both on and off the court and were well respected by their teammates.  We wish them the best of luck in the future.”