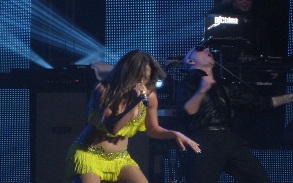 What do DJ Havana Brown, Sensato Del Patio, Enrique Iglesias, Jennifer Lopez, the Gibson Amphitheatre at Universal CityWalk and a Thursday night have in common? That is an easy answer: Pitbull.

The Miami-based Cuban rapper, singer and songwriter delivered a spectacular night of pure Hollywood entertainment as part of the Pitbull: Planet Pit World Tour 2012, which featured many guest appearances on and off stage.

With Cuban-American blogger and television personality Perez Hilton in the audience, among other celebrities and top executives in the music industry, the 31-year-old Pitbull had a particularly special event in mind, complete with many unexpected surprises.

Brown’s Crave compilation album series sports remixes of songs from other artists, and she accomplishes this rather well – especially proven during her live performance. After playing such tracks as “Around The World” and “Jump Around,” she ended her showcase with the thrilling, “We Run The Night,” off her latest E.P. When The Lights Go Out.

After a lengthy 45-minute intermission, Pitbull continued the show, opening his music segment with “Hey Baby” – an up-tempo piece perfectly setting the tone for what followed. Pitbull hit a home run and truly touched down with “International Love,” which the present international fans (Cuban, Mexican, Guatemalan, American, etc.) both loved and identified with.

“Move Shake Drop” provided the right amount of nostalgia, as it has become a sensational hip hop hit for clubs everywhere. At that time, the night had just begun. Dominican rapper Sensato Del Patio then took the stage, supplying back up to the live performance of their infectious Spanglish collaboration, “Crazy People.”

Pitbull, wearing an all black suit and shades, went on to tell the audience that L.A. is the top U.S. market for his productions. Did he want to reward the city for their continued support? It seemed like it.

Having taken off his suit jacket, which women loudly yelled for in the process, Pitbull dedicated the hip hop, crunk smash “Krazy” to L.A. before performing “Get It Started," “Rain Over Me” and the remix of “Ai Si Te Pego." Those 15 minutes were unforgettable.

Accompanied by a six-member orchestra featuring percussion, organ, drums, saxophone, bass and a DJ, a sweaty Pitbull proceeded to interact with the crowd, shouting out, “L.A., I feel so close to ya’ll tonight” after singing “The Anthem” – his version of a classic Latin song, “Mami que sera lo que quiere el negro.”

But it did not end there. Pitbull’s “Back In Time,” “Culo” and “I Know You Want Me” soon came before the show’s climax and most entertaining portion of the sold out night. In dimmed lights with the music of “I Like It” in the background, Enrique Iglesias walked to the stage and performed their popular collaboration, shocking everyone in attendance. Dressed in brown boots, blue jeans, a burgundy t-shirt and a blue hat, Iglesias did not disappoint one bit.

Before beginning “Hotel Room Service,” a dazzling Jennifer Lopez arrived onstage wearing a sexy yellow costume showing off her abs and voluptuous legs. Pitbull and JLo performed “On The Floor,” featuring a vibrantly brilliant samba-like dance routine by JLo at the end. The crowd, of course, went wilder.

It was fitting that Pitbull closed the show with "Give Me Everything," as he truly gave the audience everything he could and more, demonstrating why he has been able to maintain so much success throughout his nine-year career.