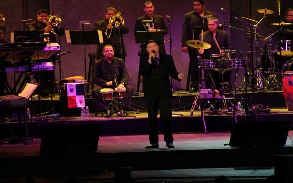 Since its evolution in the early 1900s in Cuba, salsa has embarked on different movements and evolved throughout the world. But it wasn’t until the 1970s and 80s when salsa began to truly make a name for itself.

Both Rubén Blades and Eddie Palmieri were, have been and continue to be instrumental in what is now one of the most prolific genres in the Latin music industry. In separate sets, Blades and Palmieri – accompanied by an 11-member orchestra – proved that and more at the nearly sold-out Hollywood Bowl Wednesday night.

With a vibrantly charismatic Herman Olivera as the lead vocalist, the Puerto Rican Grammy Award-winner Palmieri and his group hit the stage with confidence, performing enjoyable salsa music. As is typical for this genre, Palmieri’s tracks start off a little mellow in rhythm but gain momentum and urgency near the middle.

What made Palmieri’s orchestra shine most was each member’s manner of utilizing his respective instrument. Palmieri and the piano are a perfect match musically – there just isn’t another musician within the salsa spectrum that can produce like Palmieri and his magical touch on the ivory keys. But the band’s display via bongos, conga, timbales, trombones, maracas and trumpets was also beyond indescribable.

After an intermission, Rubén Blades took the stage. A Panamanian-born singing legend of Cuban descent, Blades entered the stage in style, dressed in an elegant black suit and tropical dark hat. Blades’s salsa catalogue features the Afro-Cuban and Latin jazz genres, and he is widely known for his nueva canción (new song) lyrical sophistication.

Opening with the classic “Plástico” (Plastic), Blades delivered his beautiful hit from the 1978 studio album Siembra. Written by him, the first words of “Plástico” are like no other song of his: “She was a plastic girl like others I see around.” The lyrics capture the listener and keep them there as the track progresses.

After the likes of the highly entertaining “Las Calles” (The Streets), the intensely provocative “Ojos De Perro Azul” (Eyes Of A Blue Dog) and the rhythmically rich “Juan Pachanga,” Blades finished off his 12-song set in style. The fans cheerfully roared when “Pedro Navaja” began. His most famous musical hit, the tune details the incident of a thug who appears to die during a robbery in his neighborhood.