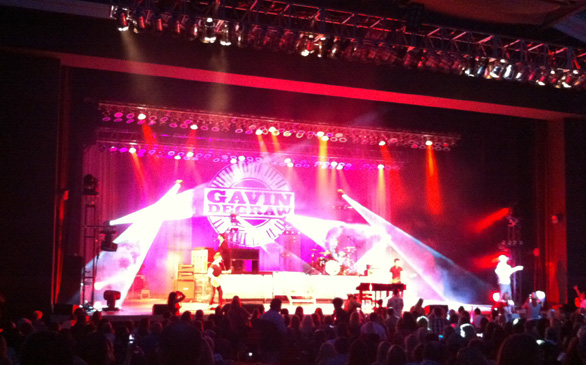 Gavin DeGraw's more than the guy who sang the opening credits for One Tree Hill during the course of its nine-season run on The CW. He proved just that this past Sunday, co-headling a show with folk pop songstress Colbie Caillat at the iconic Greek Theatre.

Just as the sun began to set around the quaint, 5,700-seat open-air amphitheater, DeGraw took the stage and set the tone for his proceeding hour-long, brimming with energy set with crowd-pleaser "In Love With a Girl." The song began with a series of minor notes on the piano and garbled up guitar chords, until all of a sudden the tempo of the track picked up and transformed into an instant dance hit. I quickly found myself fervently singing along verbatim to a song I hadn't heard for a good four years. This general trend seemed to persist through the entirety of his set.

Following "In Love With a Girl," DeGraw dove into a drawn out, hand gesture accompanied monologue about his next song on the set list, "Soldier." DeGraw half-jokes about how love and passion can incite in a person a sense of protectiveness and defensiveness for one's beloved, the catalyst behind so-called crimes of passion - a sentiment which lends itself to the inspiration behind "Soldier." This proved to be a lovely, chilled out contrast to the previous upbeat, pop-infused track "In Love With a Girl." For the rest of his set, DeGraw pulled from an equivalently eclectic blend of poppy and soulful tracks, just going to show the diversity of DeGraw's musical discography.

Roughly halfway into his set that night, DeGraw pulled out the song which arguably granted him his claim to fame - "I Don't Want to Be." If I was one of few singing along to his songs in the first half of DeGraw's set, I was certainly no longer in scarce company. Come its chorus, close to all of the audience was standing on their feet, lips moving in synchrony to the song's lyrics.

Gavin DeGraw was a household name in the early 2000s pop music scene, but has since then fallen on the wayside in regards to that genre. Despite this fact, a simple google search of DeGraw's discography of albums turns up that he certainly has not been sleeping on creating new music. In fact, DeGraw has released three studio albums in the last four years - self-titled album "Gavin DeGraw" (2008), "Free" (2009) and "Sweeter" (2011).

DeGraw's talent has been ever-present in his music from the start, only now it seems like he has better honed his knack for articulating his unique artistic sound. His music today is less poppy, and odds are his fans won't be hearing another song like "I Don't Want to Be" anytime soon. Despite these facts, I'd argue that Gavin DeGraw's music today is on another, more sophisticated level than those released during his believed heyday, circa 2006 "One Tree Hill."