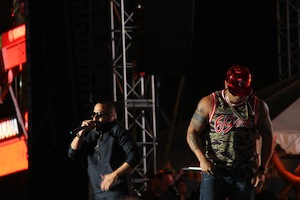 Univision's H2O Music Festival at the Los Angeles State Historic Park provided an entertainment outing for the ages on Saturday, featuring many activities and an honorable music line up.

The likes of rap-rock band Gym Class Heroes, tejano group Intocable, L.A.-based Ozomatli and Dominican-American Leslie Grace, who thrilled the crowd with her R&B-bachata melodies, among other performers. Grace's debut album is due early next year, and it is expected to be rich in music.

Food vendors made their way to the festival, which included a secluded beer garden with an almost unbelievable view that really did not provide a descent sight from the main stage. The L.A. State Historic Park is no ideal park due to its lack of grass and trees, but the location still managed to ignite fun for those in attendance.

Despite the lack of food selection, H2O did grant a solid experience. This was mostly due to the artists singing; it also featured Mexican pop singer Paulina Rubio, L.A.'s own rapper Snoop Dogg and R&B, soul, jazz singer John Legend. Rubio experienced vocal deficiencies throughout her set. Many spectators believed it was due to technical difficulties, but others said it was simply her lack of a natural singing voice.

Legend pleased the crowd from beginning to end, but the talk of the festival consisted of Snoop Dogg. The Long Beach native entertained, then entertained, and went on to entertain the fans yet again. A very likable character, the rapping legend Snoop Dogg performed some of his classics and recent repertoire. He was simply the talk of the event - even several fans exited H2O after he left the stage. It appeared as if these particular fans in attendance only showed up to witness Snoop Dogg perform.

But Wisin y Yandel also delivered an above par performance. The Puerto Rican reggaeton duo began their night with their latest singles, and they went on to perform popular tracks "Rakata" and "Sexy Movimiento" (Sexy Movement).

Overall, H2O did spark solid entertainment and produced an unforgettable experience. But, it could have been better.