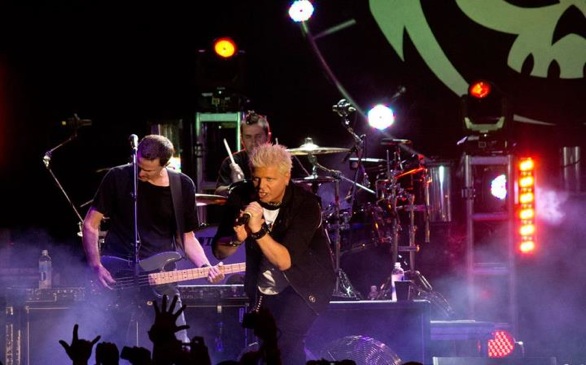 The Sunset Music Festival has come and gone and marked the end of the festival season. This citywide cherished event brought together its most eclectic mix of musicians to date and packed the Sunset Strip once again. With flying cake at one end and Lady Gaga’s inspiration at the other, it was an event that left few with nothing to smile about.

Headlining this year was Marilyn Manson, and he not only put on a show despite his lackluster tours, but he also managed to dig deep in himself again and pull off some truly inspiring renditions of his own songs, giving hope to his undying legion of fans that packed the streets. Onlookers resembled kids seeing an old friend come back and fire up the schoolyard once again. Manson even ended his rip-roaring set with a collaboration with remaining Doors’ members, Ray Manzarek and Robby Krieger, that left the street in complete awe.

But it wasn’t Manson alone that made this event better than most other street festivals this year; he had some help from bands, including Black Label Society, Steve Aoki, De La Soul, The Offspring and legendary punk founders, Bad Religion. Seeing people sing along with strangers to punk classics in the middle of the street is a sure sign that this festival created the right kind of atmosphere.

In addition to the stages that littered the street, the venues also played host to a number of acts that helped people get out of the heat and dance around.  These acts traveled far and near to make sure that good music of all types was flowing constantly.  Even new bands like The Knife Outline took the stage for the first time to packed houses; this band instantly garnered new fans.

While ducking the sun and grabbing a drink at the Roxy, my friends and I even found a new favorite act that I had never heard of before. Wallpaper hopped on stage and kept us there for its whole set. Its songs got the whole club moving and singing along, and I’m pretty sure the first time most have seen the band.  It’s this kind of booking of acts that makes this event a great time for anyone who loves music, much like the Roxy does on a regular basis.

I’m trying to think of things that I’d change, but the only thing is a bit more shade if possible or cooling areas because the sun really does set on Sunset.  Now, weather withstanding, this was a very smooth event. I didn’t see any issues, and I didn’t have any problems getting to see the acts I wanted.  A huge plus was that there was next to zero noise bleeds. That means I could go to one stage and not hear other bands in the middle of it like a bad mix.  This really helped keep the energy flowing and allowed those whose ears needed a break from the action a much-deserved rest.

In the end, this little festival has grown into a tradition that really reminds the residents of Los Angeles how important this piece of street is and that there’s a solid community of music fans that will support it any day of the week. In all honesty… I wish I wasn’t just once a year.