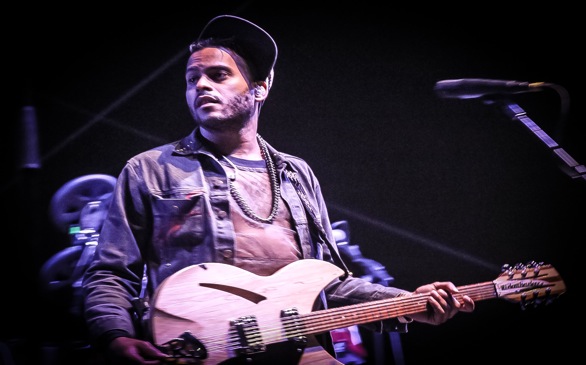 As Beirut front man Zach Condon strummed his ukulele in between songs on the Main Street stage at FYF Fest, he turned to the cluster of skyscrapers towering in the distance and proclaimed, “I don’t think we could ask for a better skyline.”

The audience, consisting largely of Angelino hipsters in their teens and early 20s, naturally hooted and hollered in agreement.

Even if he was only crowd-pleasing, Condon had a point — there are few backdrops truly better than the one Los Angeles State Historic Park has to offer. However, as picturesque as its location has been the last three years, FYF Fest is struggling to redefine itself in an age when music blogs hold as much clout as radio stations.

No act exposed that predicament better than Beirut during FYF, which moved to a two-day format for the first time this year. Condon, at only 26 years old, has already charmed fans nationwide with his unique take on world folk. But at a festival traditionally rooted in punk subculture, he and his band mates appeared out of place as one of Sunday’s headliners.

Just the night before, Swedish hardcore outfit Refused had rocked the same stage to wrap up Saturday’s slate, igniting mosh pits in every direction during its hour-long set. Earlier in the day, Fucked Up and Hot Snakes produced similar results as the scorching sun beat down on more casts of misled youth.

And with Sleigh Bells warming up the masses with doses of dance-punk and noise pop, French electro rockers M83 only needed a few dreamy, shoegazing anthems to reinvigorate attendees and further solidify the festival’s shift in direction.

Those who hadn’t satisfied their dance fix by then headed over to the Spring Street stage, where Simian Mobile Disco employed its own brand of synth-heavy electronica for an awe-inspiring finish to Day 1.

But outside of an impressive performance from alt-rock legends Dinosaur Jr. — and in particular guitarist J Mascis’ serious shredding exhibition — it was once again the beat-based groups, including Nicolas Jaar’s spellbinding blue-wave rhythms in the Broadway Street tent, who stole the show on Day 2.

While experimental pop quintet Yeasayer performed songs off its newly released album, Fragrant World, to a throng of onlookers, Twin Shadow captivated others with a sensational set of ’80s New Wave rock that showed just how far George Lewis Jr.’s band has come in less than three years.

FYF, in a similar way, has grown leaps and bounds from when it started in 2004. Whether it can figure out a way to cohesively mesh punk with today’s best pop, indie and electronic acts, however, will be what ultimately determines its future in the years to come.