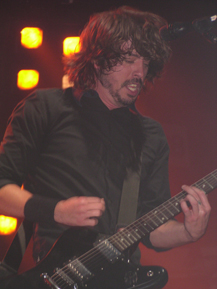 It was the Dave and Taylor show as usual, that is, frontman Dave Grohl and drummer Taylor Hawkins of the Foo Fighters, who made up the dynamic duo that set the stage on fire at the Long Beach Arena. Blasting through 10 years of memorable rock tunes, guitar riffs and pounding drum fills, the Foos put on another show that drenched the sold-out crowd with a tidal wave of energy and a never-ending stream of hits.

Starting the show with "All My Life" and "In Your Honor," Grohl proved early on that his signature wail was in top form. Playing loyally by Grohl’s side were guitarist Chris Shiflett and bassist Nate Mendel, who, although talented musicians, blended into the onstage wallpaper next to the flailing bodies of Grohl and Hawkins.

Highlights of the night included the Foos’ performing "Stacked Actors" off their album There Is Nothing Left to Lose, when the frontman jumped into the crowd and ran onto the floor of the arena, ending up at the mini-podium where he played to the lucky fans pressed up against the tiny stage. As Grohl fought his way back to the main stage, he took breathers between songs for his spontaneous rantings, which included bad jokes, random stories, burping and most anything that would make the crowd laugh, cheer or throw a fist in the air. But what would you expect from a band who made the video for "Learn To Fly," one of the funniest music videos ever?

The Foo Fighters slowed it down for another highlight of the night – Taylor Hawkins coming from behind the drum kit to sing "Cold Day In The Sun" off the acoustic disc two from In Your Honor. As Grohl ran to play drums like a kid running through the gates of Disneyland, Hawkins premiered a soulful voice that will soon be heard with his side project band, Taylor Hawkins and the Coattail Riders.

The Foos played an acoustic "Everlong" that eventually morphed into the rock version of the popular hit, followed by other classics such as "Monkey Wrench" from their breakout album The Colour and the Shape and "This is a Call" for the old school fans who remember their often forgotten self-titled debut album. As Grohl reminisced about their early days playing the Silverlake Lounge, then graduating to the Universal Amphitheatre, and now to the massive Long Beach Arena, he thanked the fans for their unwavering loyalty. As most fans would attest, they’d likely give their right arm to go back in time and see the Foo Fighters decimate the sound system of a tiny, dive club in Los Angeles.