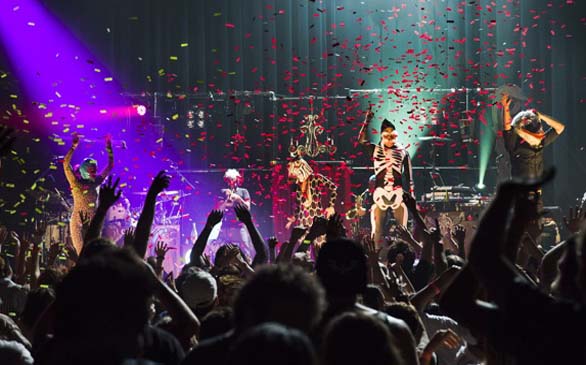 It’s near impossible these days to find a band that can blur the lines between music and theater without putting an audience to sleep. If there’s one though, it’s Beats Antique.

The Oakland-based musical trio formed five years ago under the watch of producer Miles Copeland, and it hasn’t taken its foot off the gas pedal since then.

With already four albums to boot, including 2011’s scintillating Elektrafone, Beats Antique is set to release its second E.P., entitled Contraption Vol. 2, next week. In the meantime, the band is unleashing some of its new material on a 35-date tour called “Animale Mechanique,” which concludes with a pilgrimage to Egypt for one night in front of the pyramids at Giza.

But while experimenting with musical styles from every corner of the world may be Beats Antique’s calling card, what makes the band so special in a live setting is the emphasis it puts on dance. You see, with Beats Antique, dancing doesn’t come secondary to its music; it’s on equal footing. That’s what makes its live performance such an extraordinary experience. Unlike some contemporary acts, the impact is just as great the fifth time as it is the first.

Having captivated audiences at Snow Ball Music Festival and Coachella earlier this year, Beats Antique made a pit stop in Los Angeles last Friday and once again failed to disappoint a spirited crowd. For those who made it out to Club Nokia, it was a night full of gypsy grooves and bass-heavy beats, much like the band unveils on its latest single, “Skeleton Key.”

And although the room wasn’t packed to the nines, it left more space for fans to shake their hips if their eyes weren’t fixed on the sea of animal masks and wild feather headdresses that graced the stage by the end of the two-hour set.

Call it weird if you want, but Beats Antique is nothing short of provocative.

Beats Antique will be touring the U.S. through Oct. 28. For more information and tickets, click here.