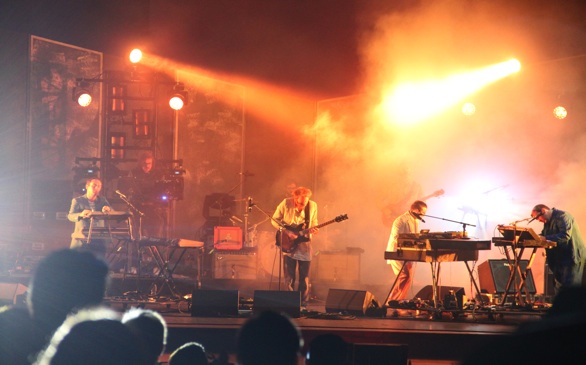 “We are ready, we are ready for the floor,” dance floor that is! The drunken souls danced the night away for the British band, Hot Chip, at the Hollywood Bowl on Sunday.  The bowl seemed to be converted into a huge dance floor on this warm summer night. With electronic dance beats along with the Los Angeles Philharmonic orchestra blaring though the system, a smile of true happiness was upon each and every face of the energized crowd.   Since the fans wanted more space to dance, the walkways were filled giving everyone more room to shake; however, security did not appreciate the rowdiness.  To say the least, Hot Chip knows how to put on a party.

Passion Pit and Omar Souleyman really prepped the crowd for such an epic dance party.  However, Passion Pit’s performance was not up to par.  Although the band sounded quite stellar, lead singer, Michael Angelakos, was a bit off in his notes; seems to me like a CD is better than watching a live performance of this band.   Its recent album, Gossamer dropped in July; however, most of the set was based on the 2009 album Manners with hit songs like “Little Secrets” and “Sleepyhead.” On another note, Syrian sensation Omar Souleyman brought a completely eccentric sound to the bowl with exotic rhythms, and the lead singer was even wearing a headdress.

Right at dusk, Hot Chip took the stage for this hot summer nightlong dance party with the song “Shake a Fist.”  With its fifth new album, In Our Heads, Hot Chip’s concoction of instruments and noises really adds to its pop-infused sound.  Playing songs from its new album like “Don’t Deny Your Heart,” “Night and Day,” “Flutes,” and “How Do You Do?,” definitely pitched its new smooth, yet energetic sound to the listeners.   Vocalists Alexis Taylor and Joe Goddard write lyrics involving emotions and the joys of life while the rest of the band provides the electro sounds.  The percussion really is made apparent while the soothing vocals linger in the mind.

Old to young, this eclectic fan base was digging the continuous set, and everyone was on their toes and clapping along to the beats.   It easily felt as though we were at a giant club with this disco pop.  This quintet really knows how to shake a crowd up.  Not wanting this ‘80s-inspired dance party to come to an end, “If I Feel Better” became the encore and had the crowd singing along and going buckwild.  It was hard to leave such an enticing show, but the groupies left grooving and with joy in their hearts and minds.  “I’m hoping with chance, you might take this dance,” and that is exactly what everyone did.

Live Show Reviews
Beyoncé’s Coachella performance was incredible — and she knew it
2,983 views