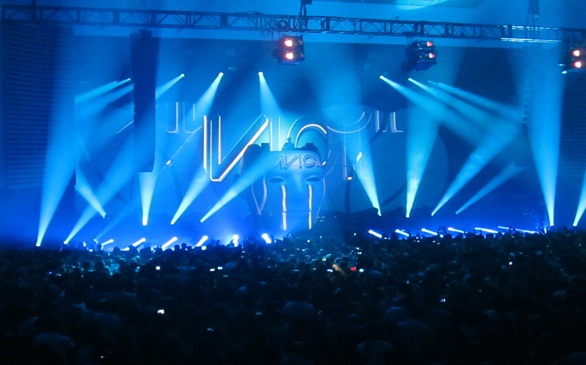 As the surrounding streets of Santa Monica stayed mostly quiet beneath the rare star or two in the dark Friday night sky, the Santa Monica Civic Auditorium filled to the brim with the loud, eager 18-and-over crowd. Dressed to the nines in standard rave outfits, they filled the locale to see Swedish DJ Avicii in one of three nights he performed at the venue as part of his Le7els tour. The electronic household name knows quite a bit of success in the music world, and you’re hard-pressed to find an EDM fan that can’t hum “Le7els” in its entirety. But the night proved, to those that did not already know, that Avicii can do so much more.

Before Avicii (aka Tim Bergling) took the stage, the venue shook with the bass notes of Los Angeles DJ Audrey Napoleon. While not many people filled the floor during her set, those who did paid close attention to the budding DJ.

Napoleon swung her long black hair to the beats, ushering in changes in each track with energetic fist pumps. Her transitions were seamless, her sounds varied, but at times the set let the audience get too comfortable as repetitive sounds didn’t amp up the energy to its full potential. Napoleon did not look like an amateur on the stage, but she only got so close to moving the crowd from happy hip shaking to full-fledged shuffling and rave dancing.

The party started once Bergling took the stage. Large pieces of cloth dropped as a giant face was revealed with Bergling looking tiny on top. Light shone onto the face and the structures behind the huge face, trippy visuals moving to the rhythm of the music. At times, the face seemed to smile down at the audience and at point began to lip-synch. Seeing Bergling himself proved difficult since you could only really see him when bright lights shone right behind him.

Yet his low visibility made the music all the more impressive. As a tiny silhouette, he doled out beats that kept the crowd screaming. From the beginning of the set, Bergling meant business. The deep bass notes made the speakers throb with an intensity that would perhaps come more expected from fellow EDM figures like Skrillex. While Bergling showcased the tinny, fast-tempo sounds that made him famous he also proved he could go to the completely opposite spectrum of electronic sounds. Bergling seemed to feed off the crowd, easing the bass intensity at times with slower, complex rhythms and saving his most hard-hitting tracks for the very end.

Bergling shouted out Swedish House Mafia during a version of “Don’t You Worry Child” and during his encore mixed up Zombie Nation’s “Kernkraft 400.” By the end of the night, Bergling proved he could deliver an impressive performance that could get an audience swaying slowly or throwing down with their best body-rolling and fist-pumping. As the twinkling, bright lights faded the venue returned to its plain fluorescent color, but Bergling’s notes still hung somewhere in the air.