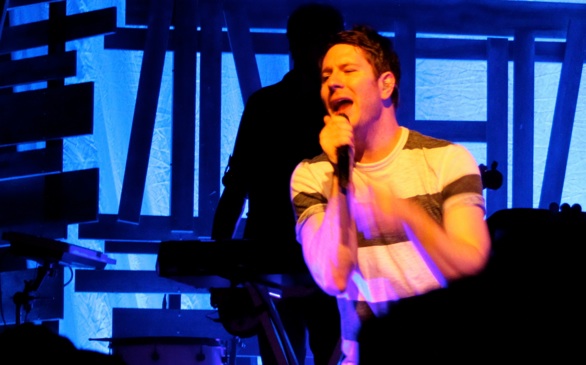 Fans were having a “Good Time” Monday night as Owl City took the stage at the Fonda Theatre in Hollywood.

The electro-pop style music that is typical of Owl City brought in fans of all ages. Adam Young, who makes up Owl City, has an uplifting sound that relates to people of any age. Children as well as adults were in attendance, each dancing and singing along to the poppy beat.

Opening with “Dreams and Disasters,” Young performed all the songs from his latest album The Midsummer Station, which released in late August. “Take it All Away” and “Gold” got fans jumping on their feet, singing along to Young’s tireless voice. Owl City also performed many songs from previous albums played, like “Hello Seattle,” “Deer in the Headlight” and the hit single “Fireflies.”

Adding a bit of a twist to the concert, Young played a piece with his fellow musicians that was purely instrumental, joking that the audience wouldn’t have to hear his voice for a bit. A dramatic drum session was also incorporated towards the end of the night and added a dynamic musical element to the overall show.

After pretending to end the show without playing “Good Time,” the debut single featuring Carly Rae Jepsen, Young and his band came back out to perform the song with even more energy than before. While Jepsen didn’t make an appearance, new girl vocalist and keyboardist Breanne Düren sang in place and did the song justice.

Owl City is Young’s one-man band, in which Young does the vocals, keyboard, programming, piano, synthesizers, guitar, drums and percussion. He now has a touring band, which includes the vocalist and keyboardist Düren, guitarists Daniel Jorgensen and Jasper Nephew and drummer Steve Goold. Young and his touring band perform great together and effortlessly combine all instrumental elements to produce a sound unlike any other.

Young was all smiles throughout the entire show, hardly stopping to take a break. He even shared with the audience how blessed he was to have them, and his sincere and genuine personality made the show even more enjoyable. Young proved to the crowd that he remains true to the uplifting sounds and lyrics that allured fans to him in the first place.