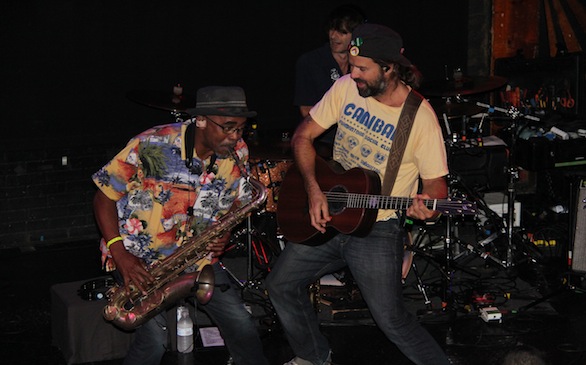 Beautiful. Everything about Jarabe De Palo is just so darn beautiful. The group, led by sensational vocalist Pau Donés, performed Sunday night at The Troubaudor in West Hollywood.

Their show, as it tends to be, sported recent and classic repertoire filled with contagious, up-tempo and even some nostalgically mellow tunes. The rock-mestizo band out of Spain is currently on a U.S. tour, which has featured initial stops in California before heading east.

With no formal introduction, the five-member unit appeared on the stage as the packed crowd cheered and  greeted them in excitement. When Donés made his way to the microphone and picked up his magical guitar, everyone depicted their emotions with no fear. That’s what Jarabe De Palo does – they eradicate your worries, putting aside present problems as the music reaches your heart, soul, mind and body.

Jarabe De Palo, who found its origin in 1996, fuse pop, rock, Latin rock and other rhythms to create some of the most original and unique melodies ever known to the Spanish-speaking population. And they performed a lot of that for their Los Angeles-based fans.

Donés appears to be an extremely happy person, and he shares his optimistic demeanor while performing. His smile, charisma, guitar playing, singing skills and  Spanish accent deliver nonstop chills to your body. “Romeo y Julieta” (Romeo and Juliet) does just that.

In “Romeo y Julieta,” Donés offers a parody. It’s a look at his version of the classic romantic, yet tragic love story of Romeo and Juliet. “Te digo que Romeo y Julieta no eran de este planeta” reads the chorus of the track, where Donés musically shines.

One of the most enjoyable melodies of the night came via “Depende” (Depends). Donés, who writes all of Jarabe De Palo’s pieces, utilizes the repetition of words in melodies to distinguish the group’s reputation as music artists. Off of the second album, Depende (1998), “Depende” details the instances in life that depend on the results of certain things. For example, the speed of an object coming down to the ground depends on how high it was thrown up – this is something that Donés manages to artistically reveal in “Depende.”

From Depende, “Agua” (Water) and “Vive y Deja Vivir” (Live and Let Live) were performed too. But the delivery in “Frío” (Cold) was something that the public will remember forever. Donés particularly wrote “Frío” for his then L.A.-based girlfriend. Surprisingly enough, Donés confessed his genuine belief that his significant other was romantically involved with him for his attitude and heart, among other characteristics.

That wasn’t the case. According to Donés, his girlfriend always strived to have a song written and dedicated to her. Donés eventually did that and after acoustically singing “Frío” (with his guitar) while dining at a restaurant, she left him. The relationship was over. Donés went on to perform “Frío” from a ballad perspective. The crowd did appreciate his story telling, and they loved the song.

But, as most often than not, fans have favorites.

The likes of “Bonito” (Beautiful) and “La Flaca” (The Skinny Girl) instantly became the hits of Jarabe De Palo’s live performance. While “La Flaca” earned them initial success in the mid 1990s, the resplendent tune “Bonito” elevated their stature as a Latin rock entity in 2003. And fans can never forget that, which is why Donés cultivated a premeditated acrobatic-like scene when singing “Bonito.”

For what it's worth, Jarabe De Palo do know how to entangle and engage a crowd during an elusive concert.