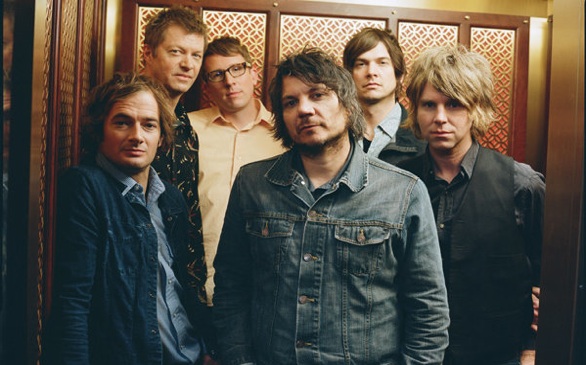 As the last summer season show of 2012, Wilco took over the stage with an extreme amount of heart like true rock ‘n’ rollers at the Hollywood Bowl on Sept. 30.

With a full moon above and the ambient lights giving delicate shadows to the art piece hanging above the band, the Wilco showed the die-hard fans a good time.  Being around for about 12 years now, the fans were anywhere from in their 20s to true country rock fans in their 50s.  This rock band brought an eclectic group of people together to enjoy songs they could happily sing along to while sipping a beer and enjoying the last summer night at the Bowl.

With quite a long set list, Wilco really played each song with extreme passion, soul and energy.  Lead singer, Jeff Tweedy and band mates, Patrick Sansone, Mikael Jorgensen, Nels Cline, Glenn Kotche and John Stirratt played their hearts out and sweated up a storm.  This hot summer night along with their enthusiastic country demeanor had the whole crowd smiling.

The voice and tempo of songs drifted from low melodies to upbeat rock ‘n’ roll jams.  During songs, Tweedy would crack a joke and engage the crowd.  When they played “Impossible Germany”, the crowd was absolutely mesmerized by the guitar solo and Cline’s bars. Tweedy introduced Cline after this song by saying, “he walks amongst you.”  Having the crowd go wild, as if Jesus was there.

The soft lighting atop the rope of white knotted fabric gave a more artsy and sentimental effect to the show as a whole.  During “Art of Almost,” the light panning of rich yellows, blues, greens and reds gave a feel as if the crowd was running through a forest while their favorite band provided the soundtrack.

Playing songs from old albums like A.M to their newest The Whole Love, the sound of soft country to an indie rock ‘n’ roll feel helped the listeners escape to different worlds of interest.  As a shaggy-haired man, looking just like the lead singer, stood next to me, with his jean jacket and cowboy hat on, he yelled out the lyrics to “Misunderstood,” not completely sure of what was to come. As security guards became distracted by another fan, I saw him make his way past the guards, straight to the front aisles.  Fans become quite sneaky when Wilco is whom they want to be closer to.

Tweedy told the crowd,“ sing along with the sound of Wilco.  It is just like the The Sound of Music, but noisier.”  He was right. Wilco had the musical presence and sound as they took over the Hollywood Bowl that night.