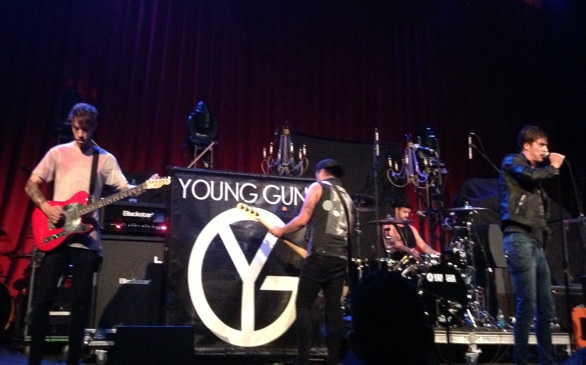 The combined active years of bands Sick Puppies and Seether appear to be the average age of a Young Guns member.

First formed in 2003, the relatively young British rock outfit has seen a few incarnations. On Tuesday night, however, Gustav Wood (lead vocals), Fraser and John Taylor (guitar), Simon Mitchell (bass) and Ben Jolliffe (drums and backup vocals) comprise the lineup, as they have since 2008.

An assorted turnout of Sick Puppies and Seether fans (sighted were the lip-ringed teens, tattooed ska women and ponytailed bikers; diverse, but black clothing held them all together) was still trickling in when Young Guns kick started its set. This is the last stop of its first tour in the United States, and they delivered an energetic performance to fairly new faces, most of which were probably hearing its music for the first time.

As charismatic front men go, Wood spurred on the audience throughout the band’s half an hour opening set. The band played alternative, punk-laden songs from its debut album All Our Kings Are Dead and Bones, which was released in the U.S. early last month.

Among a plastic-trashed sea of auto-tuned voices that is the current music industry, his raw voice and bare instrumentals were refreshing. Domestic success seemed to have been pushed aside as Wood and the rest of the group performed with the enthusiasm of a band that was hungry and ready to hustle…meaning no ego, all fire.

And although there was no hardcore dancing on the floor just yet (not like back in England anyway), Young Guns’ set proved to be an enticing pickup line that may just bring the band a whole American following in bed.