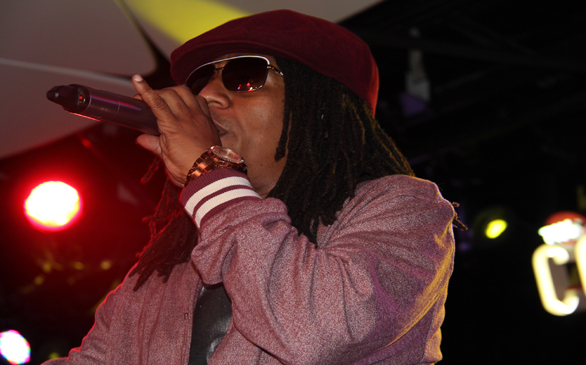 Tego Calderón sure does know how to put on a memorable show. The Puerto Rican megastar reggaeton artist lit up the stage at the Conga Room Thursday night in Downtown Los Angeles.

It marked Calderón’s second sold-out show this year at the popular venue, which brought him back for yet another gig because of public demand. He’s a desirable reggaeton act, and he’s one of the favorites, if not the most, in L.A. – a city undeniably populated by diverse followers.

After opening with “Super Natural” and briefly greeting the crowd, Calderón delivered a vibrant “No Quiere Novio” that was followed by a Spanglish version of “Lean Back.” But that was just a start of the highly entertaining night since he continued with the infectiously up-tempo “Métele Sazón,” a track that brought much acclaim to Calderón’s repertoire and distinctive style.

“El Caballito”  prompted loud cheers from the fans who wanted him back on the stage. That didn’t happen, but they were beyond satisfied. It wouldn’t be a surprise to see Calderón back at the establishment before the year ends.

Known to blend jazz, salsa, hip-hop and even merengue sporadically, Calderón has managed to instill personal life experiences within the lyrics of his tunes. To many, he’s the pioneer of underground reggaeton by dint of his early struggles in life. He considers himself an underdog at all times, which has probably led to much of his success.

The 40-year-old, who has executed some acting, including roles in the Fast & Furious film franchise, is scheduled to release El Que Sabe, Sabe in 2013. He has been nominated for a Latin Grammy for Best Urban Music Album (The Original Gallo del País - O.G. El Mixtape (The Original Rooster of the Country - OG The Mixtape)) during the XIII edition of the Latin Grammys, which will take place Nov. 15 in Las Vegas.