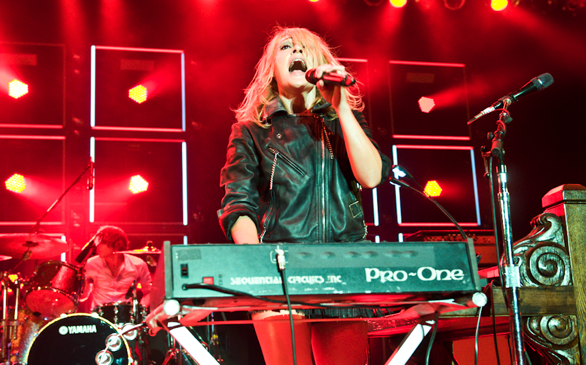 Metric took to the stage Tuesday night at The Greek Theater. The excitement in the crowd came out as fans screamed, “We love you! Emily, we love you!” from the time the band emerged until the first notes were played. Taking a moment as a band, it was a calm and collected intro that quickly turned into a show worthy of Synthetica.

Front woman Emily Haines had energy and emotion that inspired the audience and kept them on their feet. Touring in support of the new album Synthetica, Metric (as if by my request), played my favorites at the beginning of their set. “Youth without Youth” was perfectly done with energy and enthusiasm that the song demands.

The show itself was more than a concert; it was an imaginative and beautiful light show. It was as if the light was almost a member of the band. With well-timed and clearly expertly choreographed lighting, the show was on another level.

After interviewing Jimmy Shaw last month prior to the show, he seemed happy about some new developments in the live show. As he promised, the show did not disappoint and was very much a large-venue production.

The band will be continuing its tour throughout the year and if you have not yet had the pleasure of seeing them live, I highly recommend it. The dimensions and the life come out in the performances in a way that is just not possible in a living room.