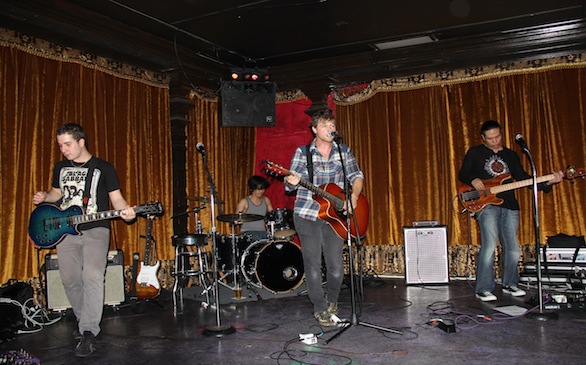 Facing Arrows is a four-member group based in Los Angeles.
(Credit: Marvin Vasquez)

Move over Foo Fighters. The Facing Arrows are here to stay for good.

A four-member music group residing in Los Angeles, the Facing Arrows sport a unique repertoire filled with contagiously romantic and catchy tunes carrying radio rock and pop-rock. Such was the case in their intimate performance Wednesday night at The Other Door in North Hollywood.

Led by vocalist Brett Collins, who also plays guitar and keys, the band also consists of Rod Madero (electric guitar), Al Aguilar (bass) and Nori Kitagawa (drums). The Facing Arrows played for a packed crowd, and they loved it.

The six-song set list began with "Suicide Town," a perfect opening for the chilly night. With Collins' vibrant demeanor on stage and the musicians' ability to connect the audience with their pulsating sounds, the tune turned out to be ideal in presenting the remaining pieces.

"Just Like You" and "Winter Heart" followed before the immensely pleasing "Starlight." This track features a poetic gesture into saving a dear friend from her own darkness. The band's passion, particularly that of Collins while both singing and playing the guitar, can be classified as beyond admirable. These dudes love playing music anywhere and in front of anyone.

With fans profoundly engaged and fully captivated, the Facing Arrows continued with "Don't Let Go" before closing out with "Crossfire" - a favorite for many.

Collins, who is Australian and a force to be reckon with in terms of sensational singing, possesses likes of John Mayer - in fact, let's call him the Aussie John Mayer. He is extremely passionate in his delivery as a distinctive vocalist; his singing is impeccable.

Although Facing Arrows (who are heavily influenced by Michael Jackson, Pearl Jam, The Beatles and others) is reminiscent of the Foo Fighters, The Goo Goo Dolls and Matchbox 20, they do evolve some similar sounds, but they do so with their own rhythmic flavors. It truly is a musical treat.