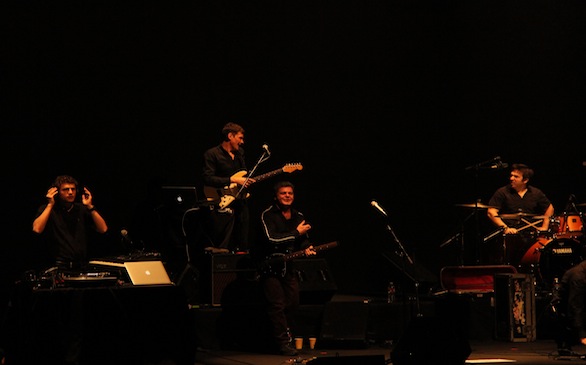 South American bands should really make their way more often to the greater Los Angeles area. They give us another look at music, just as Bajofondo did Friday night at Royce Hall within the UCLA campus in Westwood.

The eight-member act consists of eclectic composers, musicians and artists out of Argentina and Uruguay. Musically, what they formulate is simply breathtaking and almost indescribable. They combine tango, electronica, candombe and milonga, and it's often classified as neotango and electrotango, among others.

Led by Argentine Gustavo Santaolalla (composer, vocals and guitar) and Uruguayan Juan Campodónico (composer, sequences/DJ set, production) since the early 2000s, Bajofondo has achieved world recognition because of its originality in not only making music, but their way of delivering it live in front of an audience. It’s beyond entertaining; they instill it nonstop from beginning to end.

Bajofondo also includes Luciano Supervielle (composer, piano, scratching), Martín Ferrés (bandoneón), Javier Casalla (violin) Gabriel Casacuberta (bass) and Adrian Sosa (drums). All are accomplished musicians, if not geniuses. They truly are, to say the least. To state or even think otherwise could be misleading to those unaware of the Bajofondo members.

Co-founder and leader Santaolalla, filled with immense energy, occasionally sang with powerful and pulsating vocals; that was remarkable. Additionally, his guitar playing proved to be solid, but Santaolalla’s dancing skills – which surprised some, but not all in attendance – turned out to be one of the highlight’s of the night. It appeared as if the dancing was a product of Bajofondo’s music.

Is that even possible? Yes. It was ideal for “An Evening with Bajofondo,” a part of the 2012-13 scheduled series of the Center for the Art of Performance at UCLA.

With a projector servicing unique imagery on a colossal screen behind the band, video jockey Verónica Loza provided images in real time along with the music. That was very interesting. Loza, who danced and jumped at times, appeared to be serious about what she was doing. Now I know why; it’s difficult to focus with such a vibrant crowd cheering and moving to up tempo, yet soothing tunes.

My favorite element of Bajofondo’s performance came via Ferrés and his bandoneón, a kind of concertina that’s heavily utilized by tango ensembles within Argentina and Uruguay. Ferrés is out of this world. At times, I just didn’t know what he was attempting to do, but I did realize that his popular instrument was the most fruitful of them all. It served as the perfect “Rio de la Plata” instrument to Bajofondo’s sounds and genre blends – absolutely beautiful.

In 2003, Bajofondo (known as Bajofondo Tango Club at the time) took home a Latin Grammy award in the category of Instrumental Pop Album for their Bajofondo Tango Club production. It featured Jorge Drexler and Adriana Varela, among others. Next year (2013), they are set to release another disc, which could easily be nominated and win more honors.

Throughout, and before the show ended with a massive load of fans celebrating while dancing on stage with the group, Bajofondo played numerous tracks off of their upcoming album.