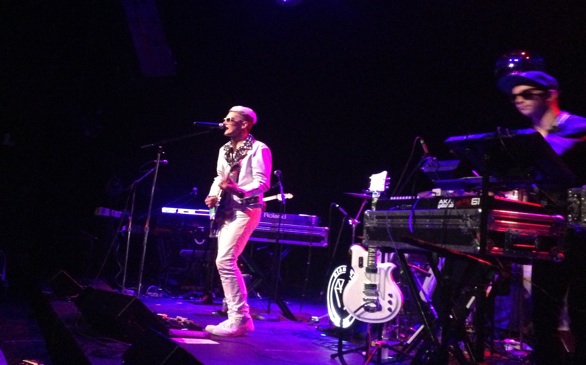 Now the majority of the audience didn’t crowd the floor drinking Coronas for the Canadian electropop artist. As the opener for the more subdued indie-pop band, Stars, for its North American tour, it was as if Diamond Rings wanted to communicate to the mostly tween/hipster crowd that this was a one man act. Out of nowhere, he made his entrance with face made-up sporting, an all-white outfit: a moto jacket with a bedazzled collar over a plain tank top, skinny jean and Air Force 1 number. Even his combed over hair, not one out of place, was bleached white.

Despite all signs pointing otherwise, this wasn’t narcissism at its sparkliest. Diamond Rings, former member of the post-punk quartet The D’Urbervilles, is known to write, record and produce his own music. But his whole persona is also clearly a product of collaborative efforts that include a hairstylist and a makeup artist. He makes no effort to hide this (in fact, his flamboyance is at the very core of his brand). Just skim his blog (hypelighter.com) where behind-the-scenes photos and videos regularly feature his partners in crime. When he takes the stage, however, all eyes are on him.

The Mayan Theatre stage, with enough disco balls for your wildest Donna Summer-sound tracked dreams, became the Diamond Rings stage. Left to right, he rollicked, strutted and shimmied as he sang his sweet lyrics back dropped by electronic beats.

He dedicated his love ballad “All Yr Songs” to everyone in the audience who has seen him live before (there were a few). The track gained fame in 2009 among Internet-sourcing music fans with its irresistible “uh-oh-oh’s” and retro kitsch, from the infectious dancing to the ‘80s music video effects. Performed live, the appeal is multiplied. Its catchy lyrics follow one until pulling into the driveway at the end of the night.

His music was a combination of lyrical straightforwardness and contemporary sounds as seamless as could be. Just like his outfit, it’s simplicity armed with a bedazzling gun. The crowd, who came prepared for a coy indie-pop night, was pleasantly surprised, even moved, into dancing along. After a “thank you” to Los Angeles, he traipsed off the stage.