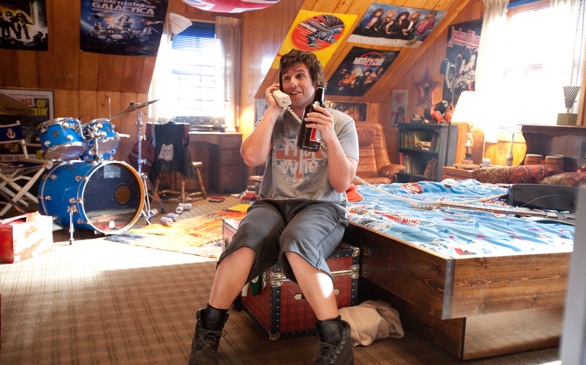 The Majors: Director Ridley Scott revisits the world of his classic Alien with Prometheus, a prequel of sorts which finds a team of space explorers setting off for a distant moon in search for intelligent life.

Wes Anderson brings his trademark quirky deadpan humor and meticulous production design to Moonrise Kingdom. Two young misfits in puppy love flee their unhappy lives during a Cub Scout retreat and try to live on their own in the woods.

Funny Business: Adam Sandler returns to his R-rated roots alongside fellow “SNL” alumnus Andy Samberg in That’s My Boy. Sandler plays Donny, a man-child who became a father while still a teen and shows up on the eve of his son’s wedding.

The Idiotbox: “Mad Men:” Season 5 is here. This season finds Don Draper (Jon Hamm) experimenting with monogamy in his new marriage to Megan, while Peggy (Elisabeth Moss) battles sexism to hang with the partners.

“Bones:” Season 7 stars Emily Deschanel and David Boreanaz as the mismatched team of a forensic anthropologist and an FBI agent. Last season, the sexual tension between Bones and Booth finally gave way in a rash moment. Now, the coworkers try to solve crimes while debating the right way to raise their child.

From the Vault: Two new collections cull the work of two of Hollywood’s greatest stars. The Robert Mitchum Film Collection is a 10-disc feast that includes classic thriller The Night of the Hunter and the WWII masterpiece The Longest Day. The Denzel Washington Film Collection shows the star to be one of our most versatile actors, with everything from the Shakespeare adaptation Much Ado About Nothing to pulse-pounding thrillers like Man on Fire.

Blu Notes: When the men went off to fight the Nazis, the women didn’t let America’s pastime go to pot. A League of Their Own is a terrific comedic look at the ragtag group of female ballplayers who overcame doubters by stepping onto major league infields. Tom Hanks, Geena Davis and Madonna star.

One of the all-time great comedies, The Princess Bride comes to Blu-ray in a 25th Anniversary edition loaded with extras, including a new featurette with director Rob Reiner and the cast. Cary Elwes and Robin Wright lead an all-star ensemble lineup in this loving send-up of fantasy tales.

Looney Tunes: Platinum Collection, Vol. 2 includes 50 re-mastered theatrical shorts from Bugs, Porky and the gang, along with a disc highlighting the work of lesser-known characters like Nasty Canasta and Cecil Turtle.