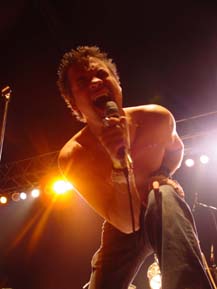 Punk rock luminaries you thought were dead rose from their tombs at the legendary crypt (the Grand Olympic) known for holding some of the best ‘70s and ‘80s punk shows in Los Angeles. "Waking the Dead" featured a night full of music performed by equally talented seminal punkers: Flipper, Marky Ramone, Fear, The Germs and Suicidal Tendencies.

Trouble started early as rowdy fans were kicked out by security. The club appeared full when Flipper played its San Francisco-based punk, but in comparison to the swarm of fans that buzzed in later, the early crowd was pitiful.

A sing-along poured from the mouths of fans when Marky Ramone and his crew played legendary songs like "Sheena Is a Punk Rocker" and "Teenage Lobotomy."

Ancient rockers and pre-pubescent kiddies flooded the venue and some rushed the floor during a powerful Fear set. Lee Vings’ spider web hair reflected light like a disco ball, making him look god-like as he belted out the words to "More Beer." The floor was pounding with energy and ample testosterone as a knife fight broke out in the middle of Fear, turning one wounded biker to the security tent for emergency assistance.

A few fans came dressed in costumes, but only one Germs member had the Halloween spirit. Musician and actor ("ER"), Shane West, burst on stage sporting a Leatherface mask as he fronted the newly reformed but otherwise all original Germs crew. West was intense and deranged, falling about the stage singing "Lexicon Devil," spiting like crazy as he carried on with true Darby mannerisms and energy unlike any role he has ever played.

The second headlining act, Suicidal Tendencies, has played more recently than the Germs but shook up the hardcore scene just as vigorously as in its day. The band stormed into our ears with the intensity of outspoken frontman Mike Muir burning his messages into our brains. The stage was packed with friends and fans as many leaped to their "deaths" into the audience.

The pit whipped around all night like an insane piece of licorice being slurped down by an overweight trick-or-treater. About 20 police cars and a few helicopters surrounded the place to disperse the crowd stampeding out of the venue. Most were too drunk to leave but squeaked by police anyway like a bunch of blind mice.