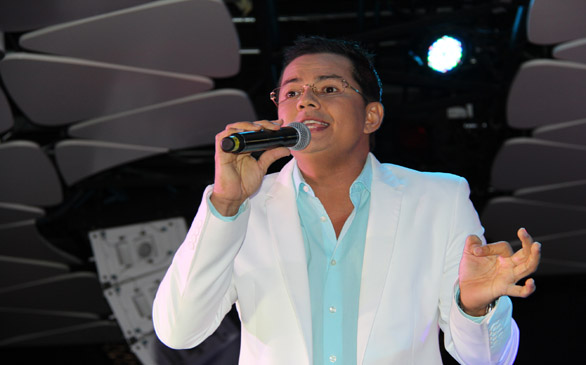 There are many words that can describe a live music show, but marvelous, musically enriching and utterly epic come to mine when classifying Charlie Zaa's live performance Thursday night in downtown Los Angeles.

An acclaimed bolero singer from Colombia, Zaa delivered a one-time concert at the stage of the world famous Conga Room. From beginning to end, he provided a brilliant spectacle of his past and present hits. He was accompanied by a full orchestra.

Wearing a white suit with black shoes and a light blue shirt, Zaa made his initial appearance to a standing ovation. The crowd had been awaiting this particular night for quite some time.

Once the boleros ended, Zaa continued with some vibrant cumbias that included an energetic "La Pollera Colorada." As soon as the beginning sound of this tune played, the audience roared of excitement. Zaa's vocals with this melody are unbelievably pleasant. It's just another world wonder, especially because he presented the fans with a couple of sexy dance moves as well.

He left the stage, but came back in about four minutes after changing attire - he sported black pants, shirt, shoes and shirt. He looked darn good. In fact, he's a great dresser on and off the singing stage.

Zaa closed out his performance with two salsa songs, which he made his own. He controlled them entirely with his prime vocal delivery. After displaying "Rebelión" by Joe Arroyo, Zaa's encore of Grupo Niche's "Cali Pachanguero" left the audience speechless while wanting more.

Currently, Zaa is promoting his upcoming album release of Sentimientos 15th Anniversary Edition. In 1996, Zaa's debut album in Sentimientos (Feelings) turned out to be one of the best selling Spanish language albums of all time. The 15th Anniversary Edition is considered a collector's package and also includes all of the original recordings, on top of a lovely bachata version of "Un Disco Más."