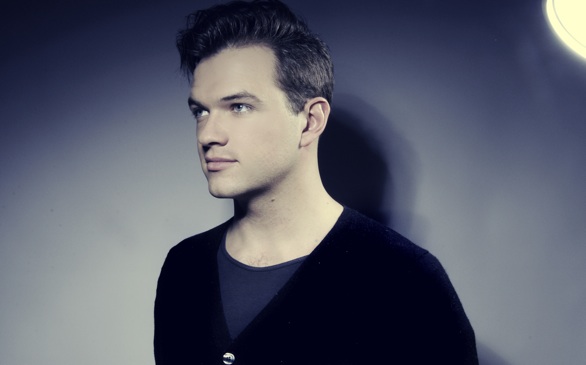 Thursday night’s bill at the Hollywood Palladium was supposed to be all about headliner Two Door Cinema Club’s return to Los Angeles for the first time since recording the follow-up album to its award-winning debut, Tourist History.

But while many were excited to finally see the Irish trio perform songs off the recently released Beacon, there was another power pop outfit that had already stolen the show hours earlier.

Since releasing its self-titled EP in March, Brooklyn’s St. Lucia has been cultivating fans all around the country — and for good reason.

As the mastermind behind the project, former choirboy Jean-Philip Grobler woos listeners with heavy synths, soothing vocals and African-influenced backbeats. At times, you don’t know if you’re rediscovering your Peter Gabriel collection that’s been accumulating dust in the garage or listening to a new Passion Pit single that just hit the radio waves. There’s even traces of Yeasayer — another experimental pop band hailing from the popular New York suburb — that find their way into Grobler’s finished product.

It’s a sonic combination from the South African native that surprisingly prompted several grey-hairs on the dance floor to start bobbing their heads during the band’s 30-minute set. Songs like “We Got It Wrong,” “All Eyes On You” and “Before The Dive” heard roars from the crowd. But Grobler’s latest concoction, “September,” proved to be especially moving. Standing as St. Lucia’s longest track to this point, it left us anxiously anticipating the release of a full-length album, which is expected to come out later this year.

Another Brooklyn product was up next, but Friends’ unique brand of dance-punk quickly became more filler than sustenance for an audience chomping at the bit to let loose. Whatever the reason was, the quintet didn’t leave much of an impact on an audience made up of mostly 20-somethings who were ready to start their weekend early.

So by the time Two Door Cinema Club entered stage right just after 10 p.m., the place was ready to erupt. They warmed up fans with their brand new single, “Sleep Alone,” and then dug into favorites like “Undercover Martyn,” “Do You Want It All?” and “This Is the Life” before coming back to their latest material off Beacon.

Yet, in hearing new tracks “Wake Up” and “Sun” for the very first time, it was hard to decipher in one hour and 15 minutes if Two Door Cinema Club’s sound has really evolved yet. In fact, during the band’s short encore break, one fan jokingly shouted, “10 more songs!” Unfortunately for him, there weren’t even 10 more songs left in Two Door Cinema Club’s catalog by then.

Two Door Cinema Club did save its best for last, closing out the night with its most popular tune, “What You Know,” as fans unleashed their best dance moves and hung on to every word frontman Alex Trimble crooned.

After all, there’s no denying the fact that the band’s following is already strong. But what transpires on Two Door Cinema Club’s third album could really be the breaking point for some.