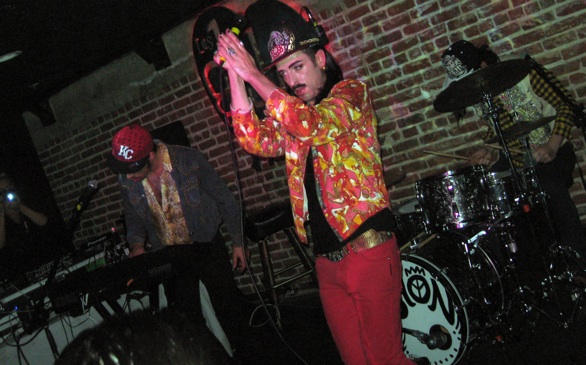 Iheartcomix threw one of the best Halloween bashes of the year last Friday the 26 at Los Globos.   The event, titled Homo-ween, included an eclectic mix of sounds ranging from techno, to electro, hip-hop and culminated with an outstanding performance by Kansas City's Missouri's electro-pop outfit, SSION.

When the clock struck midnight, SSION took the stage and set the place ablaze. The freak-scene collective, led by charismatic mastermind Cody Critcheloe, had everyone convulsing with delight and singing every song from its new album, Bent, at the top of their lungs. His airy and inviting voice lured everyone to the stage,

Critcheloe swaggered across the small stage like a pro, interacting with the eager fans and even taking song requests. When it came time to perform "Earthquake," it also became time for a haunted frenzy where people danced so hard their makeup and costumes flew off.

It continued with the brightly upbeat, "My Love Grows in the Dark." Nobody cared about the sweat or the the fact at that times they were packed so tight, it looked like sardines in a can. The crowd was hooked and wouldn't stop until the last song was played.

The band also offered campy over-the-top videos as part of its trademark performance. That night, the venue didn't incorporate elaborate stage shows involving gaudy sets and costumes, but it still managed to give one hell of a performance and pack the place to capacity.

The place was crawling with indians, vampires, mermaids, clowns and so much more. At one point, Los Globos became so crowded that you could barely move an inch to the left or to the right; but it didn't matter.

In the end, everyone had a bloody good night.