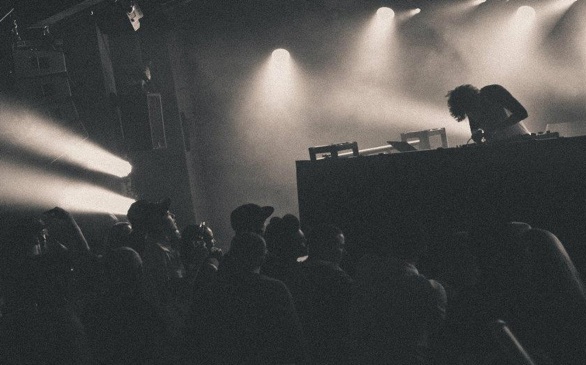 West Side patrons packed their own Central Social and Pleasure Club in Santa Monica to capacity for a Do LaB-sponsored event for Halloween. With a healthy mix of burners (various pairs of steampunk era, Mad Max issue goggles were spotted) and general partygoers squeezed tight into the main stage area, San Diego based Inspired Flight took to the stage.

Rocking a live set with a full band, the duo put on an impressive performance with its blend of hip-hop tinged mash-ups like their unconventional cover of Oasis’ “Wonderwall.” The group possesses an unusual amount of melody to its music, making it both catchy and easy on the ears.

Next, Trill Murray took to the stage with unquestionably the best name of the night. Inspired by an obsession with the Ghostbuster himself, Trill lit the crowd on fire with a spooky opening remix of The Exorcist theme before diving into an insanely energetic set that had people dancing like holy ghost-possessed evangelists. With an anonymous, mystery identity, Trill mixed and mashed behind what looked to be either a face warmer or beard made of tape. His secret identity worked to his advantage on Halloween and while his appearance was solidly ninja, his music was anything but.

With a stomach full of Central’s numerous craft beers and a brief gasp of fresh air, the 200 or so “Halloweenies” piled back in for a surprisingly hyped performance from dubstep act, Minnesota. The producer and DJ, who is ironically from Santa Cruz, was the talk of the town inside the walls of the venue. Stories were passed around from fan to fan, painting his characteristic sound that would soon lead to an explosion of energy. The artist, whose given name is a far less confusing Christian Bauhofer, entered teh stage looking like a real live anonymous resident of the Mid West; but good ord, can this guy bring some heat.

You would be hard-pressed to find a single soul in attendance that wasn’t having the time of his or her life at around midnight. Stealing plenty off his recent EP Astral Projection and plenty of other sources, the nearly two-hour set was really something special. The bass was heavy, the music was loud, and the crowd was wild.

In an era of excessive and ostentatious dubstep, there are very few who can bring it with class. Minnesota is one of those artists. Onward to the next performance, many will undoubtedly be sharing stories of the time they saw this guy on Halloween 2012.