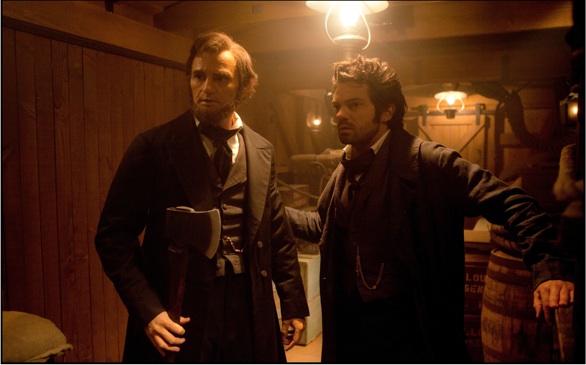 Abraham Lincoln: Vampire Hunter, a movie for those still in the Halloween spirit.
(Credit: Stephen Vaughan)

For the Holidays: Heartwarming isn’t typically an adjective associated with the work of Robert De Niro, but his latest, Everybody’s Fine, is a refreshing change of pace for the actor. In this dramedy, De Niro is a widower who sets out across the country to stop in on his grown children and finds each has her own complicated life.

Funny Business: Steve Carell and Keira Knightley lead an ensemble cast as neighbors who set out on a road trip as an asteroid barrels toward earth in Seeking a Friend for the End of the World. With Armageddon in sight, Carell determines to reunite with his high school sweetheart, while Knightley wants to get back to her family.

Under the Radar: A romantic comedy and coming-of-age story with a magical realist twist, Ruby Sparks stars Paul Dano as a washed up novelist who writes himself a girlfriend, only to have her come to life in the form of Zoe Kazan. Kazan wrote the script, which was directed by Jonathan Dayton and Valerie Faris (Little Miss Sunshine).

A quirky and original dramedy, Safety Not Guaranteed stars Aubrey Plaza (“Parks and Recreation”) as Darius, one of a trio of journalists who answers a bizarre personal ad for a time travel companion. Their investigation leads them to an eccentric grocery clerk (Mark Duplass), who may or may not be insane.

The Horror! The Horror!: If the self-important trailer for Steven Spielberg’s latest film has you cringing, check out Abraham Lincoln: Vampire Hunter. Based on the best-selling novel by Seth Grahame-Smith, this horror-action flick centers on an axe-wielding Great Emancipator as he discovers vampires are in cahoots with Confederate forces.

The Idiotbox: Picking up where Spinal Tap left off, there’s “Metalocalypse:” Season 4. After a two-year hiatus, the headbangers of Dethklok are back with guest appearances by Dweezil Zappa, Jon Hamm and director Werner Herzog.

BBC America’s first original series, “Copper:” Season 1, takes place in the same corrupt and wild world as Gangs of New York—19th century New York’s Five Points. The series follows a young Irish cop as he solves the crimes no one else seems to care about while moving between Manhattan’s segregated neighborhoods.

Lauren Ambrose (“Six Feet Under”) leads a powerhouse cast in the miniseries remake of Robin Cook’s thriller “Coma.” Ambrose is a medical student who suspects something sinister is going on at her hospital when a growing number of patients slip into comas. Her investigation quickly gets her in over her head. Richard Dreyfuss, Geena Davis, James Woods and Ellen Burstyn co-star.

John C. Reilly has given some great performances in his career, but it’s hard to top his bizarre turn in “Check it Out with Dr. Steve Brule:” Seasons 1 & 2, a spinoff of the sketches that began on “Tim and Eric Awesome Show, Great Job!” An Adult Swim parody of low-budget local market newsmagazine shows, Brule chats with local celebrities, gives life advice and tackles life’s big subjects.