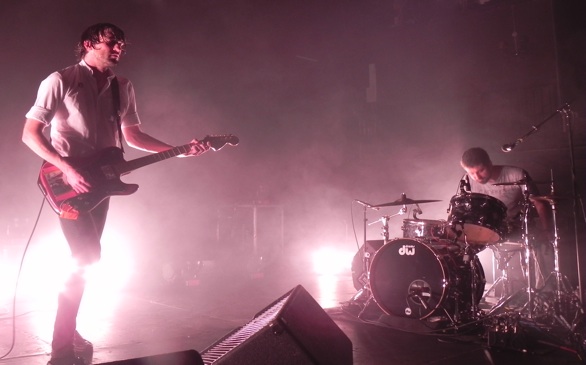 With the catchy name of a Anime clan, Japandroids are the latest in the army of two-member bands to catch on in recent times.  Their award winning album Celebration Rock was listed on countless top 10 lists of 2012, with its catchy blend of punk and rock that is simply too infectious not to appreciate. After a sell out show at the Echo last June, the Canadian duo returned to the Fonda Theater for another highly anticipated performance.

The lead singer, bless her heart, looked and sang like a blonde Becca Mood, a theory further emphasized by her Angeleno roots, angsty looks and naive ambition. Again, not a deal breaker by any means, but the band’s music grew increasingly tiring as the monotonous set continued like a broken record on loop.

A Ramones cover spiced up the set briefly, but only in a “Look at me, I’m vintage” kind of a way.  The whole set, which was a few minutes shy of a half hour, reminded me of a high school battle of the bands performance with bleached Becca shouting choruses as (and this actually happened) Mom crashed through the crowd to snap some polaroids to show the fam over dinner. Having said all this, they get two big thumbs up for what they are going after, and I have no doubt that their sound will grow with age.

The crowd filled out substantially during the interim before Japandroids, but the venue never reached capacity, which is rare at the Fonda. Lead singer/guitarist Brian King, donning skin tight jeans that bordered on jeggins, made his way onto the stage to a roaring applause as he was joined by drummer Brian Prowse. They wasted no time diving into tracks off their acclaimed songs like "Adrenaline Nightshift" and “The Nights of Wine and Roses.”

King, whose apparent ego could be smelled from the second floor balcony, grew increasingly loquacious as the night went on. Playing some stuff “they never play anywhere else” on this “really special night,” the band dipped into their arsenal of b-sides to the applause of a few in the audience who were familiar.

The energy in the room was really something as the duo rocked out on stage, at times dipping into short jams as the two played to each other. Again, however, the sound grew slightly monotonous as they stretched out the set with older songs that didn’t have nearly the catchy appeal of Celebration Rock.

Nevertheless, die hard fans in the crowd loved it, and you could tell the band loved being up there. Drummer Prowse was, in particular, a force of nature up there, contributing to vocals and keeping the pace quick and dirty throughout the band’s hour-plus set.

The duo’s unquestionable talent remains a selling point, and they certainly bring a lot to the table with their live sets. Japandroids, as a whole, proved again that two can work just as well as four in more ways than one.