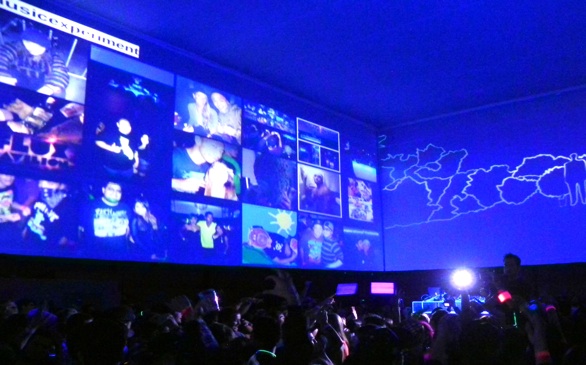 In what was described by one very stoked individual as a “really sick backyard rave,” British dubstep producer Flux Pavilion’s free show took place on a makeshift stage set up in Santa Monica Airport’s Hangar 8.

Hundreds were turned away at the door as capacity was reached, inciting several to jump railings, forcing the LAPD to get involved. A veritable army of SWAT team members decked to the nines in riot gear greeted attendees that were leaving the event.

The event, which highlighted the brighter side of corporate sponsorship, was part of a series of free events put on by Intel and MTV Iggy. Opener Toki Monster got the crowd moving early on before Flux took to the stage, with his trademark head of bleached hair.

Those who were fortunate enough to make it in were treated to quite a night.  The hangar echoed the ludicrously loud bass from the performance as an LAPD helicopter did loops above to the amusement of everyone. Flux Pavilion, who has grown to be one of the biggest names in the ever-popular genre, played a healthy mix of remixes and originals to the ecstatic crowd. The stage was set against a giant cube of projector screens that showcased Instagram photos of the night and various other appropriately party-oriented visuals.

Flux’s performance was cut short around 11 p.m., giving the young crowd ample time for beauty sleep on this school night. Remarkably, the event ran without a hitch from the inside, credit to L.A.’s finest outside and the amazing, once in a lifetime location and unique setup. Next time you bash corporate America, please remember the number of amazing, loud, free benefits they sometimes provide for our listening pleasure.