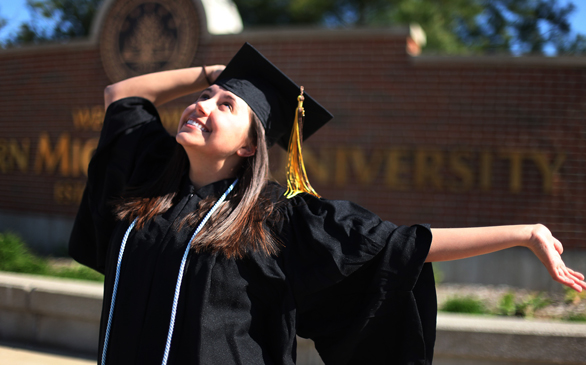 The job market for recent college graduates has began to grow, according to a report..
(Credit: Mandi Wright/Detroit Free Press/MCT)

As the Michigan State University graduate student wraps up her work on a master's degree in business administration, she's already got a job lined up for after graduation next spring.

Lots of her fellow MBA students across the country don't, and are facing a tough job market, according to MSU's 42nd annual Recruiting Trends report, released Thursday.

Overall, the job market for this spring's graduates is projected to grow slightly. There are expected to be 5 percent more job opportunities for graduates of four-year colleges and universities this year versus last year, said Phil Gardner, the director of MSU's College Employment Research Institute. That's a slight drop from what the report found last year, when it projected a 7 percent increase in job opportunities for four-year college and university graduates.

"Despite the college labor market growing at about the same modest pace as last year, the feeling is different," said Gardner. "I do not see as much confidence among the nation's employers going into the second half of the 2012-13 academic year."

The slight drop is largely attributable to employers' concerns about the election and the government's ability to handle the oncoming fiscal cliff, Gardner said. The survey is built on responses from companies across the U.S.

"This is the first time I've seen a presidential election dampen down numbers," Gardner said. "I think employers are concerned about the coming fiscal cliff and if it can be handled."

There is strong demand for graduates with associate's degrees, which is up more than 30 percent and led by applied engineering, health care technology, business and computer science, the survey found.

The southern half of the country still is leading the pack in terms of growth in job opportunities, the survey found. That's largely due to the shift of manufacturing jobs down South, as well as the number of large customer service companies headquartered there, such as Home Depot, Gardner said.

The Great Lakes area of the country - Michigan, Wisconsin, Illinois, Indiana and Ohio - is projected to have the strongest growth of the northern half of the country.

Business remains the most frequently requested major across the nation, while marketing, advertising, English, psychology and computer science are gaining ground. On the other hand, engineering majors and accounting at CPA firms are struggling after years of growth.

The market for MBA students will decline an estimated 6 percent - a surprise given the recent strong performance of this market segment, Gardner said. There's now a glut of people with MBAs in the job market.

Brody went to a career fair in Indianapolis earlier this year, and interviewed with several companies, including Bayer Corp. She then was invited to visit company headquarters in New Jersey and interviewed with more people; when she got an offer to be an assistant brand manager, she took it.

She said several of her fellow MBA students at MSU have jobs lined up with companies at which they did summer internships, but those who don't are doing a lot of interviewing now and waiting to hear back.

"Even if the jobs report says there aren't a lot of jobs, I think that if you are well-qualified and do your preparation for the interview, there will be jobs out there," Brody said.