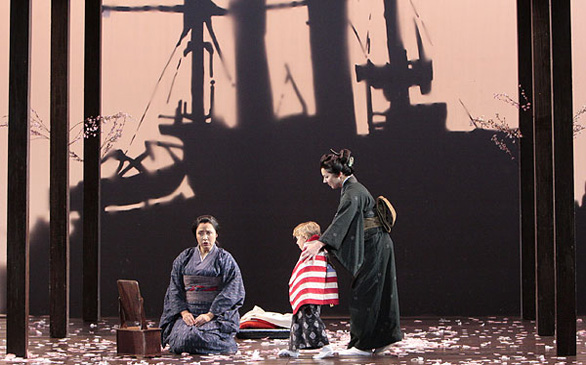 Led by pulsating soprano Oksana Dyka as Cio-Cio-San, "Madame Butterfly" is by far one of the most dramatically entertaining and tragic operas of all time.

"Madame Butterfly" features a love between a beautiful woman from the East (Japan) and a charismatic man, Brandon Jovanovich as Benjamin Franklin Pinkerton, from the West (United States) that eventually turns a "soon-to-be happily marriage" into a disaster. Cio-Cio-San falls madly in love for Pinkerton while he visits Japan. Although Pinkerton isn't aware of it, he and Cio-Cio-San, also known as Butterfly, conceive a child - an innocent boy who has no clue of what's going on.

During the early 20th Century, Pinkerton travels to Japan on duty since he's a Lieutenant in the U.S. Navy. He purchases the rights to Butterfly, who is just 15 years of age at the time. Even at her young age, Butterfly feels a passion for Pinkerton - a passion that can best be classified as love towards an older man.

Butterfly experiences an emotional set back when her uncle denounces her for abandoning her faith and her family after she converted to Christianity - a strategy she utilized to please Pinkerton into accepting her forever. That never comes. Pinkerton simply wanted a fling.

Eric Owens, who portrays the American Consul named Sharpless, delivers a brilliant performance as the baritone. He advises Pinkerton into not fooling Butterfly to believe something is to be produced of their relationship, but Pinkerton doesn't listen. Instead, he and Butterfly cultivate another life.

It's been three years since Pinkerton left Butterfly. Pinkerton went back to the U.S., and Butterfly hasn't heard from him since then. Buterfly soon confesses and, thusly, introduces her son to Sharpless, who is beyond disbelief.

This is where "Madame Butterfly," now playing at Dorothy Chandler Pavilion until Dec. 9, begins to be a very compelling story.

Ready to move on with his life, Pinkerton attempts to confront Butterfly as he and his wife, Kate, visit her home. But he can't manage to do so, and he soon leaves. Butterfly, who was asleep, awakens...the rest is a shocker that one-must-see.

Overall, Dyka hands out an impeccable singing and acting performance although one must admit that she's more fulfilling in Act II than throughout Act I. Jovanovich, on the other hand, captures the crowd with his strong, manly vocals. Interestingly enough, Owens' mesmerizing portrayal of Sharpless electrified the entire performance. The audience became enticed by his delivery in operatic vocals and acting abilities. On top of that, he sports a sweet, charming demeanor.

In my time of witnessing live operas, I've never seen anything so dramatic, but at times comical. "Madame Butterfly," which made its debut in Los Angeles, carries two lengthy acts - an aspect originally written and installed by Giacomo Puccini.

"Madame Butterfly" is indeed a theatrical piece to catch this fall. It's a must see.

Opera
“The Festival Play of Daniel”: March 17 @ Cathedral of Our Lady of Angels
2,325 views