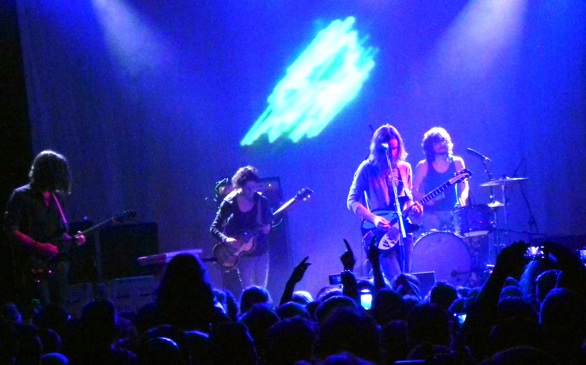 Tame Impala took the stage at the notalbe theaters this past weekend.
(Credit: Zach Bourque )

Aussie buzz band Tame Impala took to the stage for two sold out shows at the El Rey and Fonda Theater on Nov. 16 and 17.

The psychedelic rock band, which has garnered heavy airplay on KCRW amidst the release of its second full-length Lonerism, was the talk of the town.

Openers The Amazing, from Sweden, kicked off the nights with its blend of trippy folk rock that sounded like Fleet Foxes after a Cypress Hill contact high. Naming your band The Amazing has certain repercussions if you end up being terrible, but they certainly lived up to the built-in hype that they present.  The sound was much softer than expected, but their set bobbed and weaved through its 45-minute time frame with ease, relying much on instrumental jams that fleshed out the set.

By 10, you could feel the anxiety of the crowd as they waited for Tame Impala to take the stage. While both shows were sold out, the smaller atmosphere of the El Rey contributed to a more intimate setting for the headliner. Tame Impala took to the stage around 10:15 and instantly dived a highly distorted, loud-as-hell set that would impress anyone in attendance.

Founder and front man Kevin Parker’s rich, distorted vocals worked in harmony with the chugging guitar to transfix the crowd in ways that few bands can. The band, who’s throwback psychedelic rock sounds like Cream or even early Beatles, won’t win any awards for shear energy - but that’s not exactly what they’re about. Though the 20-something-aged band (or myself for that matter) were never around for the psychedelic ‘60s and ‘70s, their trippy, heavily layered music served as a musical Delorean back into the period, a trip that several in the crowd were indeed on.

The band broke into multiple spaced out jams mid song, like during the nearly 10-minute hiatus during “Elephant.” At times this caused the audience to forget what song they started with. The whole ordeal was entirely transfixing, and if the clouds of aromatic smoke filling either arena were any indication, the audience was similarly in the zone.

The set was filled with tracks from both of their full lengths, including Lonerism’s “Feels Like We’re Only Going Backwards” and “Apocalypse Dreams,” and Innerspeaker’s “Lucidity” and “Solitude is Bliss.”

KCRW’s own Jason Bentley was spotted in the crowd, jamming out to a band he helped propel to popularity with constant airplay on his show “Morning Becomes Eclectic.”  Again, it’s with much sincerity that I applaud this station for supporting smaller bands like Tame Impala and turning them into highly regarded music events, as was shown this weekend.

Fans of rock ‘n’ roll (in particular, trippy, spaced out psychadelic rock ‘n’ roll) owe it to themselves to check out Tame Impala if they have not already.  There’s no telling when the band will return to the states. But at the very least, the ecstatic crowds this weekend were fortunate that Tame Impala made Los Angeles their home for two of the nine nights of their North American tour.