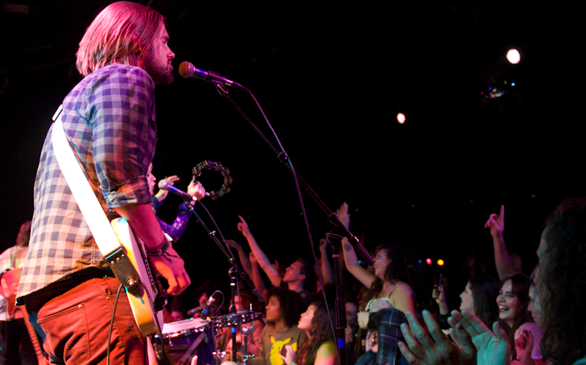 The crowd screamed, jumped and raised their hands as Youngblood Hawke performed at the El Rey.
(Credit: Tamea Agle )

Youngblood Hawke has been on KROQ constantly with its upbeat single “We Come Running.” Local to L.A., the band took over the Roxy in rare form last night. I have been at the Roxy countless times, but I rarely see the entire crowd jump along with the band with hands raised and screaming.

Before the show, I met a few die-hard fans that had been following the band since the beginning. One of the girls, clearly deep into her birthday celebrations, was not sure if she would like their new set as much as the old one. But by then end of the show, she was near tears with happiness as she sang along to “We Come Running.” She and the rest of the audience were pleased with the performance as they jumped into each other in a semi-failed mosh pit.

The performers’ energy was very impressive. Drummer Nik Hughes was all over the stage, running from his drum to his keyboard while singing and keeping the audience of 18 to 22-year-old girls happy and singing. The band, made up of Nik Hughes, Alice Katz, Simon Katz, Sam Martin and Tasso Smith, took up the small stage with their excitement from the moment the curtain went up to the moment it fell down.

“Forever” was my personal favorite song of the night, and while I didn’t know the words at the beginning, I was dancing along with the fans by the end of the song.

The use of the drums by three band members (and a number of other instruments throughout the set) brought the band’s larger-than-life sound to the venue. Alice Katz added a feminine touch to the group with her vocals and strong drumbeats, while Hughes took charge of the audience.

Ending the show abruptly, the band waited less than a minute before emerging for their encore. They finished with a heartfelt thank you to the DJ’s of KROQ and a celebration of the number of people that were at the show.

“Last time we were here, there were 17 of you I think. Now look at this place!” they said.

You can see Youngblood Hawke them next weekend at KROQ’s Almost Acoutic Christmas.