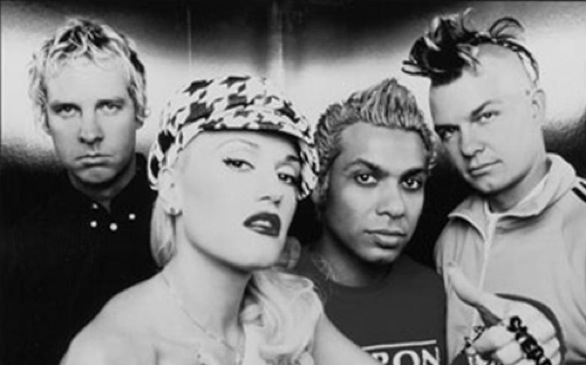 No Doubt is back with a multi-night performance at the Gibson Amphitheatre.
(Credit: nodoubt.com)

The seats were packed, the lights were dimmed and smartphones were all a-blaze as Gwen Stefani, Tony Kanal, Tom Dumont, Adrian Young, Gabriel McNair and Stephan Bradley were welcomed to the stage by their insatiable fan base. Taking a few moments to soak up the energy from the crowd, the band formed a solid flying V facing the audience on stage. This was the only moment where the band stood still and sent a clear message to their fans that they had no other intentions but to rock the stage and resonate their sound through the Hollywood Hills as part of No Doubt’s 7-NIGHT-STAND at the Gibson Amphitheater.

Within a few minutes, they zoomed to their positions and kicked off the evening with “Push and Shove,” one of No Doubt’s latest singles and the title of their sixth studio album released earlier this fall. The song is a raucous number of horns, bass, guitar and drums with a special guest vocal spot by Busy Signal (performed in concert by Bradley). Noted as the band’s ‘Bohemian Rhapsody’ number, the lyrics, drums and tempo progression of this song were unbelievably refreshing, and there’s nothing on the airwaves that can touch its sound.

As the band played new songs from Push and Shove and a few of their classic hits such as “New,” “X-Girlfriend” and “Sunday Morning”, the band’s energy was rock steady as Stefani and Kanal skanked on stage, while Dumont wailed on his classic guitar. Of course, adding a shot of adrenaline was Young on the drums with McNair (trombone/keys) and Bradley (trumpet/perc) on either side, sounding their horns and grooving to the music.

Halfway through their performance, No Doubt changed up their set and ‘settled down’ for a few acoustic numbers at the edge of the stage. They performed a few notable songs from their earlier albums “Hey You” (Tragic Kingdom) and “Simple Kind Of Life” (Return of Saturn) as well as “Sparkle” and Stefani’s supposed personal favorite, “One More Summer” from Push and Shove.

The show itself was a hybrid of songs to satisfy the ear buds of both the diehard No Doubters and the younger fans mirroring the growth individually and collectively of No Doubt that is reflected on their latest record. But regardless of whether or not they were playing the classic ballad “Don’t Speak” or shaking the theater with “Hella Good,” it’s the No Doubt brand we all know, love and waited long enough to hear.

As the night came to a close, Stefani rounded out the evening taking control of the audience and holding a mini battle of the sexes during “Just A Girl” shouting, “All the boys sing with me: I’m Just a Girl!” And she then asked the girls to do the same...naturally the girls won this scream match! For encore numbers they performed their new single “Looking Hot,” the classic closer “Spiderwebs” and as a special treat for longtime No Doubters, the winning favorite old school song from their website vote, “Total Hate” (Beacon Street Collection).

As always the band greeted fans a little while after the show and then took positions for their final signature bow.

“It’s all your fault we’re here tonight! Thank You!” said Stefani during “Spiderwebs”. Always a gracious and gratuitous band, they were as just as much thankful to performance as their fans were to hear them after their hiatus.

The band will be holding ground at The Gibson Amphitheater until Dec. 8.