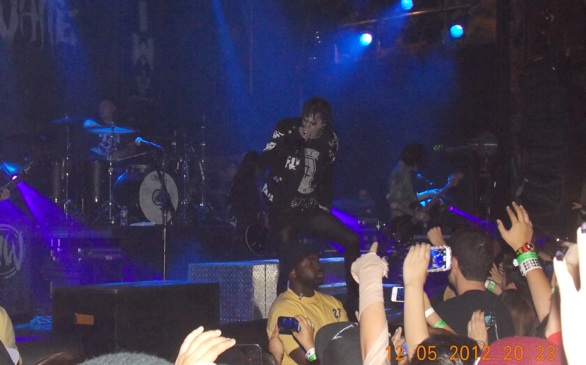 Motionless in White pumped out the crowd into a frenzy at the House of Blues.
(Credit: Julie Chamberlain )

Head banging and mosh pitting is what everyone thinks of when they think about metal, and the Infamous Tour contained just that. Tour is headlined by Motionless in White, and it is its first North American headlining tour. The tour also includes three other bands: Chelsea Grin, Upon This Dawning and Stick To Your Guns.

Walking into this small, dark theater that is the House of Blues, the first thing I saw were stands containing the band merchandise for all the bands playing that day. There was one small stage and two bars with seating on either side of it.

After the opening, which was a small band, Upon This Dawning took the stage. The band played a four-song set that was its most exciting when it covered the popular song “Call Me Maybe.” The crowd started jumping and singing, and I even got a special treat when the lead singer of the band pointed at me while singing the line “call me maybe.”

After Upon This Dawning got off of stage, Stick To Your Guns came up to play. The lead singer of this band explained a small back-story about each song before playing as well as expressing some of his views of life. This seemed to make everyone very excited to hear the song begin. The band played its very popular song “Against Them All” from its album Diamond, which was a big hit with the crowd. You could tell that Stick To Your Guns loved the reaction because they were playing it up and really having fun jumping on the stage like crazy.

Fourth to play was Chelsea Grin. They seemed to be the band that a lot of people had actually been there to see. The pit was packed as they arrived on stage. Chelsea Grin played its first song right away, but the crowd didn’t move much. After the band stopped and said who they were, they started a second song, and the crowd started getting amped up a little more. The lead singer was almost antagonizing the crowd to get louder, mosh harder, and said, “Tear the roof off this place!” In the end, the band ended up playing a five-song set that made the excited crowd shout, “One more song!” But Chelsea Grin did not come back on.

Finally, it was time. When Motionless in White got on stage, it was a mad house. Even though this is a tour that is going on because of the release of its new album Infamous, the band only played one new song. Most of the songs played were from older records, and I assume this was to keep the crowd happy; the older the song was, the more excited everyone became.

As they played their song “We Only Come Out At Night,” the whole crowd was jumping. During there seven-song set, the pit was pushed to its breaking point with jumping and pushing as a massive circle pit appeared in the back part of the floor.

Motionless in White had a special treat for everyone there when, for the first time ever, the band performed “City Lights” off of its album Creature. Lead singer Chris “Motionless” Cerulli was reluctant to play the song as he stated on stage.

“Now this song isn’t one of my favorites,” he said. “In fact, to be honest, I hate it. But it’s not about what I want. We are here to play music for you, so it’s what you guys want… So you guys have to help me out by singing this one loud.”

The band ended its set and left the stage to the crowd’s protest, but instead of ignoring its fans, Motionless in White came out and did an encore performance. The fans jumped and moshed one last time before it was all over.

Motionless in White left the stage, and the hot, sweaty, tired crowd exited The House Of Blues. You could tell that everyone had fun at this hardcore metal event.